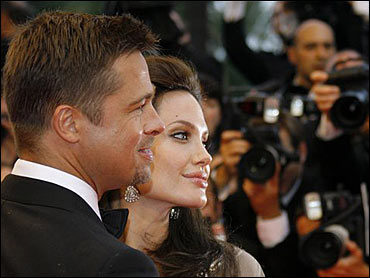 People magazine has scored the U.S. rights to exclusive photos of Brad Pitt and Angelina Jolie's newborn twins, a representative for the magazine told The Associated Press on Friday.

"We're thrilled to be able to feature these pictures in People," said managing editor Larry Hackett in a statement. "They will delight our readers who have followed the growth of the Jolie-Pitt family."

The babies were born one minute apart July 12 in Nice, France. Their arrival begat much speculation over which celebrity magazine would win a bidding war for the first photos of the boy and girl.

Three celebrities have met with Los Angeles-area elected officials in a marathon complaint session to discuss ways to regulate paparazzi.

Singer-songwriter John Mayer says he believes freelance photographers should be licensed, taxed and credentialed with a big, white letter "P" affixed to their car license plates.

But Los Angeles Police Chief William Bratton says he doesn't think much of the effort, calling it a "waste of time." He says there are already enough laws on the books to take care of any problem.

And he added that with Britney Spears behaving herself and Paris Hilton out of town, things are pretty quiet anyway.

The founder of the provocative women's video series, "Girls Gone Wild," has settled another of the many legal cases against his soft-porn empire.

Joe Francis, a 35-year-old multimillionaire, reached a settlement this week with a Panama City woman who said she was 16 when filmed flashing her breast in 2002, the Pensacola News Journal reported. Her picture was on the cover of a popular video.

Francis' attorney says the woman will not be paid but will be freed of a countersuit alleging she abused the legal process.

Francis was released following a year in jail in March after pleading no contest to charges of child abuse and prostitution for filming underage Panama City girls. He is facing federal tax evasion charges in California.

A book of fairy tales written and illustrated by Harry Potter creator J.K. Rowling is being published for charity.

The Children's High Level Group says it hopes to raise $8 million through sales of "The Tales of Beedle the Bard." Rowling co-founded the charity, which supports institutionalized children.

The book is a collection of five wizarding tales referred to in Rowling's seven-book Potter saga. It was initially produced in an edition of seven handwritten copies. One was bought by retailer Amazon at an auction in December for almost $4 million.

The book will be published Dec. 4 by Bloomsbury in Britain and Scholastic in the United States. Amazon plans a more expensive collectors' edition priced at $100.

Philip Morris International has pulled down billboards and posters promoting an Alicia Keys concert Thursday in Indonesia's capital after the singer protested the cigarette company's sponsorship.

The logo and slogans of A Mild cigarettes, produced by a Philip Morris affiliate, featured prominently in promotional materials for the concert.

The Washington-based Campaign for Tobacco Free Kids anti-smoking organization initially drew Keys' attention to the company's association with the show.

In a letter released by her record company, Sony BMG Music Entertainment, she said she had asked the company to stop the branding.

"I am an unyielding advocate for the well-being of children around the world and do not condone or endorse smoking," she said.

Philip Morris International did not say whether it was demanding its money back, nor reveal how much it had paid to sponsor the event.

"Whether tobacco sponsorship of music events leads to youth smoking is a matter of serious debate," the company said in a statement received Thursday. "Having considered the facts in this specific instance, we have decided to withdraw all branding associated with this concert."

In the United States, Philip Morris USA and other major tobacco companies are prohibited from sponsorships of concerts, but there are no such regulations in Indonesia.