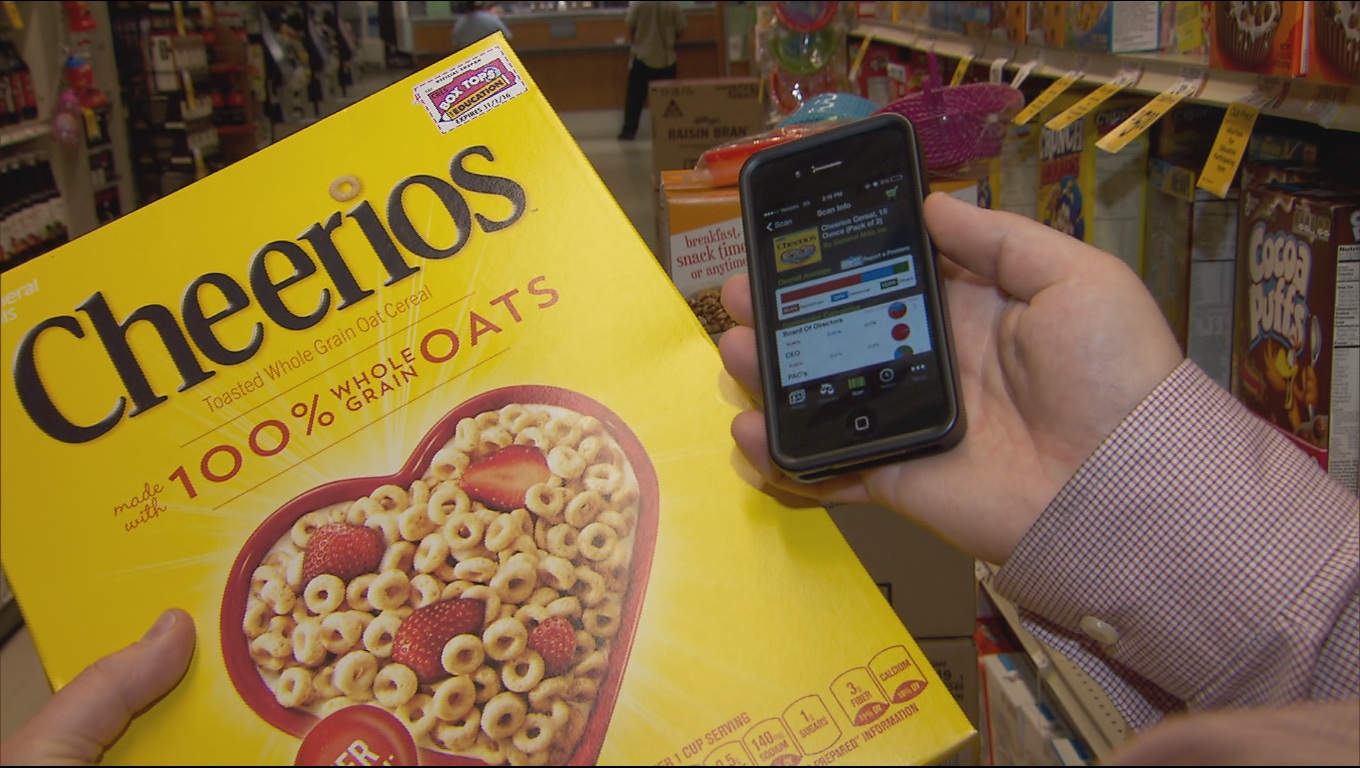 When you shop for groceries, you might check the labels to see which foods are leaner in calories and fat, but you've probably never checked those labels for political leanings.

Yet companies that make products in the grocery aisles pour billions of dollars into the political system, and now a smartphone app called BuyPartisan is giving new meaning to voting with your wallet, reports CBS News correspondent Nancy Cordes.

"It is a Eureka moment: So you go, 'Oh my God, I wasn't aware of that!'" said Matt Colbert, creator of BuyPartisan.

It's an app that allows you to scan the barcode of your favorite grocery items and find out just how much money the company and its CEO gave to either political party.

"So you have the taste and the quality of Cheerios, but now you also have a new set of data to also look at," Colbert said.

General Mills, which makes Cheerios, gave 63.5 percent of its political donations to Republicans and 24 percent to Democrats.

The CEO gave 100 percent to the Democratic party.

The app only went live three weeks ago but has already attracted some attention.

The Washington Post editorial board said, "...we hope BuyPartisan fails" because "if the app succeeds, it would be a sign that Democrats and Republicans aren't even willing to do business with one another any longer."

Colbert acknowledged there are many who don't like what he's doing with the app.

The early publicity attracted nearly 100,000 users and landed BuyPartisan in the top 20 on the iTunes app page.

"A lot of people are heavily partisan Republican and heavily partisan Democrat, and then there are just people who are upset with the amount of money that's in politics right now," Colbert said. "I think that this offers an appeal for all of them."

It's all based on publicly available data compiled by non-profit groups like the Sunlight Foundation.

"My first reaction was, cool, we tried to do that!" Sunlight's Gabriela Schneider said.

"When I go to vote and when I go to make a purchase, I should know what's the politics behind that. I should be able to know who's behind the political ad that's telling me to vote this way or that way," Schneider said.

At the very least, it makes you look at your household products in a different way.

The app showed 95 percent of contributions made by Quilted Northern toilet papers went to Republicans. The parent company, Georgia Pacific, is owned by Koch Industries.

Colbert said his next goal is to enable people to see what companies spend on specific issues they care about such as immigration or gay rights.