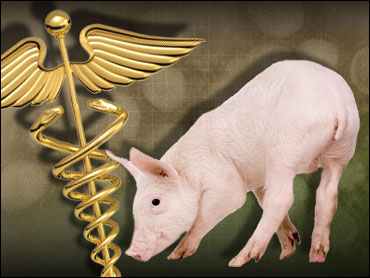 Government officials are calling on U.S. businesses to help manage swine flu this fall by getting vaccines to vulnerable workers and encouraging employees with symptoms to stay home.

Commerce Secretary Gary Locke said Wednesday that employers should develop plans for managing both seasonal and swine flu. Businesses should encourage employees who are at-risk for swine flu to get the vaccine as soon as it becomes available. First in line are pregnant women, health care workers and younger adults with conditions such as asthma.

The government is trying to prepare for the possibility of a widespread outbreak this fall, which could hurt businesses along with the broader economy by keeping workers home. Unlike regular seasonal flu, the H1N1 virus which causes swine flu has not retreated during the hot and humid summer months, and so far has infected more than 1 million Americans.

The three cabinet secretaries said each company must develop its own unique plan. The officials declined to give more detailed instructions, explaining the scope of a potential outbreak is still unclear.

About 45 million doses of swine flu vaccine from GlaxoSmithKline, Novartis and several other companies are expected to be available by mid-October. Federal officials plan to begin shipping vaccines out to the states when they become available.

The World Health Organization has estimated that up to 2 billion people could be sickened during the swine flu pandemic, which already is known to be responsible for more than 1,400 deaths.

"The government can't do this on its own," Locke said. "For this effort to be successful we need businesses to do their part."

Guidelines posted online Wednesday recommend businesses develop plans for operating with reduced staff, in the event of a flu pandemic.

Napolitano said this is particularly important for transportation and infrastructure companies.

Employers also should consider allowing employees to work staggered shifts or from home if an outbreak becomes severe, the government officials said.

Workers with flu symptoms should be encouraged to stay home and remain there at least 24 hours after they no longer have a fever, the government recommends.

"If an employee stays home sick, it's not only the best thing for that employee's health, but also his co-workers and the productivity of the company," Locke said.

Other recommendations for companies include: keeping work areas clean, stocking up on hand sanitizers and other supplies, and sending employees home at the first sign of flu symptoms.

"In some areas there may be a lot of flu," Sebelius said. "In other areas, very little."