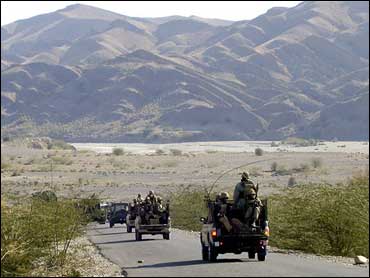 In a shift with profound implications, the Bush administration is attempting to re-energize its terrorism-fighting war efforts in Afghanistan, the original target of a post-Sept. 11 offensive. The U.S. also is refocusing on Pakistan, where a regenerating al Qaeda is posing fresh threats.

There is growing recognition that the United States risks further setbacks, if not deepening conflict or even defeat, in Afghanistan, and that success in that country hinges on stopping Pakistan from descending into disorder.

Privately, some senior U.S. military commanders say Pakistan's tribal areas are at the center of the fight against Islamic extremism; more so than Iraq, or even Afghanistan. These areas border on eastern Afghanistan and provide haven for al Qaeda and Taliban fighters to regroup, rearm and reorganize.

This view may explain, at least in part, the administration's increasingly public expressions of concern.

At a Pentagon news conference last week, Defense Secretary Robert Gates said that while the U.S. respects the Pakistani government's right to decide what actions are needed to defeat extremists on its soil, there are reasons to worry that al Qaeda poses more than an internal threat to Pakistan.

"I think we are all concerned about the re-establishment of al Qaeda safe havens in the border area," Gates said. "I think it would be unrealistic to assume that all of the planning that they're doing is focused strictly on Pakistan. So I think that that is a continuing threat to Europe as well as to us."

That threat extends most immediately to eastern Afghanistan, where CBS News correspondent Cami McCormick spent last week with the U.S. Army, watching first hand as they trolled the tiny villages for Taliban and al Qaeda militants and their supporters.

A military spokesman said the frequency of attacks had dropped slightly in the border area due to winter weather making the rugged mountain terrain much more difficult for militants crossing the border from Pakistan. He also that more checkpoints have been set up, but the border remains porous.

But, one local Afghan governor, who was himself targeted by a suicide bomber in 2007, that stepped-up military operations across the border are pushing the threat into his province.

The Pentagon says it has fewer than 100 troops in Pakistan, including personnel who are training Pakistan's paramilitary Frontier Corps in the western tribal region along the Afghanistan border.

The U.S. military has used other means, including aerial surveillance by drones, to hunt Osama bin Laden and other senior al Qaeda leaders believed to be hiding near the Afghan border. Ground troops on the Afghan side sometimes fire artillery across the border at known Taliban or al Qaeda targets, and U.S. officials have said special operations forces are poised to strike across the border under certain circumstances.

In recent days, administration officials have said they would send more U.S. forces, including small numbers of combat troops, if the Pakistani government decided it wanted to collaborate more closely.

It is far from certain that U.S. combat troops will set foot in Pakistan in any substantial numbers. On Friday, Pakistan's president, Pervez Musharraf, said his country opposes any foreign forces on its soil. "The man in the street will not allow this - he will come out and agitate," he said. Musharraf said the U.S. instead should bolster its combat forces in Afghanistan.

The top two U.S. intelligence officials made a secret visit to Pakistan in early January to seek Musharraf's permission for greater involvement of American forces in trying to ferret out al Qaeda and other militant groups active in the tribal regions, a senior U.S. official said Saturday. Musharraf was said to have rebuffed an expansion of an American presence in Pakistan at the meeting, either through covert CIA missions or by joint operations with Pakistani security forces.

The number of U.S. troops in Afghanistan has grown over the past two years from about 20,000 to the current total of 28,000. That is the highest number of the war, which began in October 2001. The total is to jump by 3,200 this spring with a new influx of Marine reinforcements, including 2,200 combat troops who will bolster a NATO-led counterinsurgency force in the south.

Most U.S. troops in Afghanistan are based in the country's volatile eastern provinces, where McCormick spent last week embedded with soldiers who are trying to win the support of local populations in Paktia and Khost provinces and rid the area of militants. Click here to see her special report.

(CBS/Cami McCormick)
Five hundred U.S. and Afghan forces have recently fanned out across Paktia province, travelling along dirt roads regularly mined by the Taliban, to weed-out the militants, reports McCormick. In addition to house-to-house searches (seen at left) and other standard military operations, the Army is trying to win hearts and minds by paving roads and opening schools.

"There is strong pressure now from the international community to find some solution to Afghanistan because of the fear that this could quickly go south," said Ashley J. Tellis, a senior associate at the Carnegie Endowment for International Peace. In 2006-07, he was an adviser to Nicholas Burns, the undersecretary of state for political affairs.

"We haven't lost the war yet, but we could be on our way to doing so," Tellis said in a telephone interview Friday. He strongly recommends strengthening the U.S. military presence in southern Afghanistan.

The vast majority of deployed U.S. troops are still in Iraq, although the force of nearly 160,000 is set on a downward trend. In recent weeks U.S. officials have spoken of Iraq as moving toward stability, with al Qaeda-affiliated fighters weakened and possibly forced to make a last stand.

So there is no wholesale shift of U.S. military firepower from Iraq to Afghanistan. Gates recently rejected a Marine Corps proposal to move the 20,000-plus Marine contingent in Iraq to Afghanistan, reflecting a worry that Iraq's progress is still fragile.
Just last month Adm. Mike Mullen, chairman of the Joint Chiefs of Staff, told Congress that the war in Afghanistan is a secondary priority. "In Afghanistan we do what we can. In Iraq we do what we must," he said.

Yet it is apparent that as security conditions in Iraq improve, the administration is looking closer at what needs to be done in Afghanistan to counter recent gains by the Taliban. The Taliban ruled the country in the late 1990s and provided haven and support for bin Laden as his global terrorist network laid the groundwork from Afghanistan for the Sept. 11 attacks.

Gates is leading a NATO effort to produce a statement of goals for Afghanistan that spells out clearly what is at stake. The purpose is to bolster NATO governments' efforts to convince their publics that fighting and dying in Afghanistan is an investment worth making. The statement is supposed to be ready for adoption by President Bush and other NATO leaders at a summit meeting in April.

Also, the administration is showing more interest in deepening its involvement in Pakistan.

Teresita C. Schaffer, director for South Asia at the Center for Strategic and International Studies, said Friday that an important indicator of that approach was the recent visit to Pakistan by Adm. William J. Fallon, the commander of American forces in that region. Fallon met with senior officials, including the new chief of the Pakistani army, Gen. Ashfaq Kayani.

"Why is that happening now?" Schaffer asked. "It suggests to me that the administration is taking this much more seriously than it was." That has meant more attentiveness to the needs of U.S. commanders in Afghanistan, including officers' concerns about countering the threat inside Pakistan.

"The sense I get is that at least in military terms they are getting a response from Washington which they weren't getting all along," said Schaffer, a career foreign service officer who was deputy assistant secretary of state for South Asia in the administration of former President Bush.