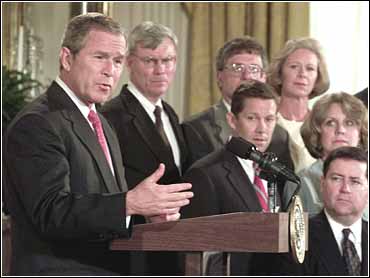 President Bush on Wednesday formally nominated 11 people, predominantly conservatives, for appellate court judgeships as the administration geared up for an expected battle with Democrats over some of the choices.

Introducing his nominees at a White House ceremony, Mr. Bush urged the Senate to "rise above the bitterness of the past" and rapidly confirm his slate of candidates.

After taking care to mollify Democrats with two nominees previously tapped by former President Clinton, Mr. Bush asked the evenly divided Senate "to provide a prompt vote to every nominee."

But Senate Democrats vowed Wednesday to hold up at least one of Mr. Bush's choices, a former aide to Republican Sen. Jesse Helms of North Carolina.

Senate Democratic Leader Tom Daschle said Terrence Boyle was the only one of the 11 candidates nominated against the wishes of a home-state Democratic senator.

Daschle said Democrats would seek to block confirmation of Boyle until the concerns of that senator, John Edwards of North Carolina, were resolved.

Daschle said Democrats may oppose other nominees, but have not yet had an opportunity to adequately review their credentials and philosophies.

Democrats in the Senate, which must approve all judicial nominees, are still angry that Republicans in the last few years did not act on a number of candidates for judge submitted by President Clinton. White House officials were bracing for a possible Democratic backlash.

"The nominees who were selected for their qualifications are likely to be confirmed," said Sen. Patrick Leahy of Vermont, ranking Democrat on the Judiciary Committee that will hold confirmation hearings.

"Those who were selected primarily for their ideology are not likely to be confirmed," Leahy said.

Controversy and contention has surrounded the judicial confirmation process throughout the nation's history, but the acrimony reached new levels when Democrats scuttled the Supreme Court nomintion of Robert Bork in the 1980s. Republicans, in turn, blocked several Clinton nominees to lower court seats.

Mr. Bush's nominees are little known outside judicial circles, but their selection offers a first glimpse of his resolve to add conservatives to the federal judiciary and the eagerness of Democrats to stop him.

Mr. Bush portrayed his picks as models of "experience and character" and said he will seek always to nominate judges who don't "legislate from the bench."

"They come from diverse backgrounds and will bring a wide range of experience to the bench. All have sterling credentials," he said.

Though a review of their legal records suggests Mr. Bush's first judicial nominees are mostly conservative, he took pains to offer a diverse slate by appointing three women, one Hispanic and two blacks.

One of the former Clinton appointees on the list was Roger Gregory, a Democrat and the first black on the 4th U.S. Circuit Court of Appeals in Richmond, Va. He was named to the appellate court in December after the Senate adjourned without acting on his nomination. He would have to step down by the end of the year unless he won Senate approval.

Spokesman Ari Fleischer said the White House could find no precedent of a president of one party re-submitting the appeals court nominee made by a predecessor of a different party, reports CBS News White House Correspondent Peter Maer.

Seven of the candidates are sitting judges. Many owe previous judicial selections to Republican presidents.

None is known as an ideologue or as especially partisan, although it is hard to gauge the prospects for confirmation when the Senate is split 50-50.

The other nominees included: Washington lawyer John G. Roberts, to serve on the U.S. Court of Appeals for the District of Columbia; Washington lawyer Miguel Angel Estrada for the same court; federal district judge Barrington D. Parker, appointed to the bench by Mr. Clinton, to the 2nd Circuit in Connecticut; and federal district judge Edith Brown Clement for the 5th U.S. Circuit Court of Appeals in Louisiana.

Mr. Bush initially planned to make as many as 14 nominations for the lifetime appointments, but officials said he would put on hold a few that were facing congressional opposition. Sources said one of them was Rep. Christopher Cox, a California Republican, opposed by the state's two Democratic senators.

The Washington Post reported Wednesday that Mr. Bush was also withholding the nomination of Washington lawyer Peter Keisler, who was being opposed by Democratic senators from Maryland.