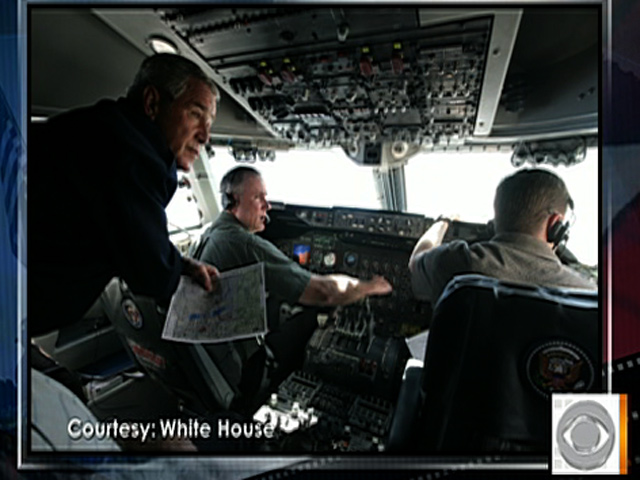 "You've been trained for every kind of attack scenario, but this was completely different - (an) attack from within."

With those words, (Ret.) Col Mark Tillman summed up the tension in the cockpit of Air Force One as he captained the crew flying then-President George W. Bush around the country on September 11th.

He gave "Early Show on Saturday Morning" co-anchors Russ Mitchell and Rebecca Jarvis a firsthand account of what went on.

"(We had) no idea what was actually about to occur," Tillman, who was pilot of Air Force One from 2001-2009, recalled. "We just knew that we were sitting on the ground in Sarasota (Fla., as Mr. Bush was reading children's books with students in an elementary school), so were highly vulnerable. So, it was time to either move the plane or start figuring out exactly how we could make a sequence of events to protect the president with the aircraft."

Tillman continued, "As he came bounding up the stairs, he was a man of business the whole time. He had all the information, and we hooked him up on the plane with all the communications he needed to talk with the first responders, national leaders, etc.

"From the moment he got on the plane, (his) plan was to get back to Washington, D.C. (But) none of the plans we had said ever take you back into battle, that kind of stuff. So we kept working it with the staff. However, my job is to do exactly what he says so that's what I did, took the plane off and headed back."

But Air Force One first went to Barksdale Air Force Base in Louisiana, then Strategic Air Command headquarters in Omaha.

How concerned was Tillman that Air Force One was also a target that day?

"I was very concerned," Tillman says. "Obviously, I've got the president of the United States on board, so obviously, you have to assume that we are a target. So that's what we started doing, planning against all the known threats that could possibly be out there and start working it, to try to counter each one."

"We had to (have that protection), Tillman says."Eventually, at one point, we were told Angel was next, the classified call sign of Air Force One. (We) didn't know how they were gonna (try to) do it. But we needed some kind of support on us in case there were other hijacked aircraft or some kind of ground threat against us."

Next stop for Air Force One was Washington.

Seeing the Pentagon "brought it all home for me," Tillman says, "because, throughout the day, I was so busy, I kept getting reports of the towers, and collapse, and Flight 93, but I never saw anything.

"So as we came back in, you could see the Pentagon smoldering, the destruction, and right then it made you realize that, definitely, we were at war, and it was time to get busy. We had to get ready to bring the president back to New York."

Looking back, would he have done anything differently?

"No, not a chance. We perceived each of the threats, each of the threats came in. We adjudicated each threat and we were ready to go. It worked perfectly. The crew did amazing, as well as watching the president in action. He did tremendous work as we were heading to the different spots and throughout the country."