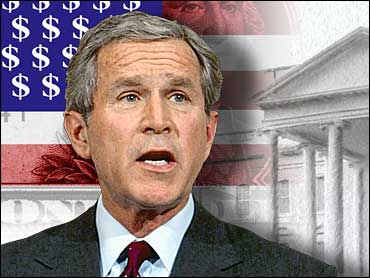 President Bush rounded out his fund raising for 2003 on Thursday, picking up $1 million in a Republican stronghold outside Washington for a re-election campaign that has already raised more than $112 million.

The event at a suburban Virginia hotel was Mr. Bush's 44th and final personal appearance at a fund raiser for his re-election campaign since he launched his bid for a second term in May. All together, the campaign has put on 99 cash-collection events, with other headliners including Vice President Dick Cheney, his wife, Lynne, first lady Laura Bush and others.

The campaign's final fund raiser for the year comes Friday in Jackson, Miss., with Cheney as the scheduled speaker.

On Thursday, for the standard $2,000 contribution, the 600-plus GOP donors got a rare sit-down meal with fancy entrees like goat cheese, Mediterranean roasted chicken, dill-crusted tilapia, tiramisu and cheesecake.

Most Bush-Cheney events this year have featured simple buffet fare and standing-roon only accommodations.

The total Mr. Bush has raised so far this year, including donations by mail and over the Internet, won't be released until the campaign prepares a report due after year's end.

But the $112 million total already exceeds the record $106 million Mr. Bush raised for the 2000 campaign when, unlike this year, he had a Republican opponent to battle.