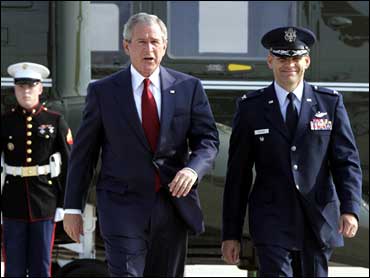 President Bush said Monday the United States will not waver in demanding that Iran suspend all uranium enrichment-related activity before America would join international talks to resolve the nuclear standoff.

"Nuclear weapons in the hands of this regime would be a grave threat to people everywhere," Mr. Bush said on the eve of a trip to Europe.

Mr. Bush said the United States, Britain, France, Germany, China and Russia have adopted a unified approach to resolve the impasse with Iran diplomatically. He said that Tehran must "fully and verifiably suspend its uranium enrichment and reprocessing activities" before the United States will join in negotiations with Iran.

"Iran's leaders have a clear choice: We hope they will accept our offer and voluntarily suspend these activities so we can work out an agreement that will bring Iran real benefits," the president said. "If Iran's leaders reject our offer, it will result in action before the Security Council, further isolation from the world and progressively stronger political and economic sanctions."

The five permanent members of the U.N. Security Council, plus Germany, have offered Iran a package of incentives in return for a long-term moratorium on enrichment - a process that can produce fuel for nuclear power plants or material for atomic weapons.

Iran has not responded formally so far, saying it is still reviewing the package, and may propose amendments to the deal. But officials from Tehran have insisted that enrichment is an inalienable right and that talks must be unconditional.

On the same day, the former U.N. chief weapons inspector said Iran will be able to produce a nuclear bomb within five years if it is allowed to enrich uranium on an industrial scale.

"It is a matter of will," Hans Blix told The Associated Press, adding that while Iranian leaders now say they have no desire to build atomic weapons and want U.N. inspectors to oversee their facilities, "they might change their mind." "By 2010, 2011 they could probably have a nuclear weapon, if they want it," Blix said after handing Indonesian officials a copy of a report released earlier this month by the independent Weapons of Mass Destruction Commission.

He said he thought that was why the Western world would likely continue to stand very firmly against any industrial-scale enrichment in Iran, even though most nations support its right to produce nuclear energy for peaceful purposes.

"The Western world is not against Iran moving into the modern nuclear age, that is recognized," Blix said. "But it is saying, 'Please stay away from enrichment of uranium ... because it will raise tension in the Middle East. You can buy it abroad."'

Blix made similar comments in March, saying Iran was "at least" five years away from developing a nuclear bomb. He encouraged the United States and other Western governments not to rush talks with Tehran aimed at a peaceful solution.