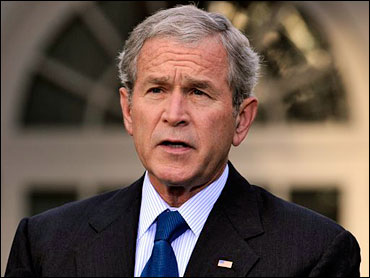 Big banks started falling in line Tuesday behind a rejiggered bailout plan that will have the government forking over as much as $250 billion in exchange for partial ownership — putting the world's bastion of capitalism and free markets squarely in the banking business.

Some early signs were hopeful for the latest in a flurry of radical efforts to save the nation's financial system: Credit was a bit easier to come by. And stocks were down but not alarmingly so after Monday's stratospheric leap.

The new plan, President Bush declared, is "not intended to take over the free market but to preserve it."

It's all about cash and confidence and convincing banks to lend money more freely again. Those are all critical ingredients to getting financial markets to function more normally and reviving the economy.

The big question: Will it work?

There was a mix of hope and skepticism on that front. Unprecedented steps recently taken — including hefty interest rate reductions by the Federal Reserve and other major central banks in a coordinated assault just last week — have failed to break through the credit clog and the panicky mind-set gripping investors on Wall Street and around the globe.

The Dow Jones industrials declined 77 points on Tuesday after piling up their biggest point gain ever on Monday on news of Europe's rescue plan and in anticipation of the United States' new measures.

Initially the U.S. government will pour $125 billion into nine major banks with the hope that they will use the money to rebuild their reserves and to increase lending to consumers and businesses. Another $125 billion will be made available this year to other banks — if they need it — for cash infusions.

In return, the government will get ownership stakes in the financial institutions. The shares will pay a 5 percent dividend to taxpayers for the first five years, reports CBS News business correspondent Anthony Mason.

Banks, meanwhile, will have to accept limitations on executives' compensation.

"Government owning a stake in any private U.S. company is objectionable to most Americans — me included," Treasury Secretary Henry Paulson said in announcing the initiative. "Yet the alternative of leaving businesses and consumers without access to financing is totally unacceptable."

New York Times columnist and Princeton University economics professor Paul Krugman, who was awarded the Nobel Prize in Economics on Monday, told CBS News there is no guarantees for the plan's success.

"Although most economists I know think this is the right thing to do, no one is sure it will work," said Krugman. "And there will be manic depressive markets as people wonder."

Economist Lakshman Achuthan said the government's investment in the banks was a necessary move for their survival.

"If the U.S. Treasury, the U.S. Government, is putting the full faith and credit of the United States behind an institution, a company, the company is not going to fail," Achuthan told CBS News.

Whether the $250 billion will be sufficient to encourage banks to lend again is hard to tell, said Anil Kashyap, professor of economics and finance at the University of Chicago's Graduate School of Business. The Treasury Department arrived at the $250 billion figure after consulting with banking regulators.

"This plan will work if we wind up with everybody pretty well capitalized," Kashyap said. "But if it doesn't reach that point, we'll be back in soup down the road."

The government is counting on banks not to just clutch onto the cash, which aggravated the credit crisis to begin with.

"The needs of our economy require that our financial institutions not take this new capital to hoard it, but to deploy it," Paulson said.

Treasury switched gears deciding to first use a chunk of the $700 billion from the recently enacted financial bailout package to pay for taking partial ownership stakes in banks, rather than using the money to buy rotten debts from financial institutions. The government said it still intends to buy the bad mortgages and other toxic assets, another move aimed at getting credit flowing again.

Besides the $250 billion this year on the stock purchases, Bush said Tuesday that an additional $100 billion would be needed in connection with covering bad assets. That would leave $350 billion of the $700 billion program, presumably to be spent by the next president.

Economists as well as both Democratic and Republican lawmakers on Capitol Hill had urged Treasury to first move forward on the capital injection plan, arguing that was a more effective way to battle the financial crisis.

The first bank to take advantage of the program was Bank of New York Mellon which announced it would sell $3 billion in preferred shares to the Treasury. Other banks initially participating include Goldman Sachs Group Inc., Morgan Stanley, JPMorgan Chase, Bank of America Corp., including the soon-to-acquired Merrill Lynch, Citigroup Inc., Wells Fargo & Co., and State Street Corp.

The government's cash infusions are attractive to banks because they are having trouble getting money from elsewhere. Skittish investors have cut them off, moving their money into safer Treasury securities. Financial institutions are hoarding whatever cash they have rather than lending it to each other or customers.

Two other initiative also were unveiled to stem the credit crisis: The Federal Deposit Insurance Corp. launched an insurance fund to temporarily guarantee new issues of bank debt — fully protecting the money even if the institution fails.

And, the FDIC will start providing unlimited deposit insurance for non-interest bearing accounts, which are mainly used by businesses to cover payrolls and other expenses. Frequently these accounts exceed the current $250,000 insurance limit, so the expanded insurance should discourage nervous companies from pulling their money out. Both of these efforts would be financed by fees charged to participating financial institutions — not money from the bailout package.

Even if the new plan works, economists caution that it could take years before locked up lending returns to normal.

The difference between the rate at which banks lend to other banks and the rate at which they buy U.S. government debt has narrowed, but remains near a 25-year high — a glaring sign that there's still fear in the market. But there was a hopeful glimmer elsewhere: A crucial short-term, bank-to-bank lending rate called the London Interbank Offered Rate, or Libor, inched down Tuesday. That rate is important because a lot of commercial loans and many adjustable-rate mortgages are tied to it.

Some of the banks had to be pressured to participate by Paulson, who wanted healthy institutions to go first as a way of removing any stigma that might be associated with banks getting bailouts. Paulson met privately with bank executives on Monday.

The government's shares will carry a 5 percent annual dividend that will increase to 9 percent after five years. That increase in the rate is aimed at providing an incentive for companies to buy the government out. The advantage to the taxpayer is that if the rescue plan works, then the shares can be sold for more than the government initially paid, providing a profit on the transaction.

The move, in effect a partial nationalization of the banking system, does put the United States in the awkward position of owning shares in institutions it also regulates. The shares purchased by the government will be nonvoting. They also give the government a priority in getting paid back if a company fails.

"The government's role will be limited and temporary," Bush pledged. "These measures are not intended to take over the free market but to preserve it."

At a news conference last month, Bush defended his administration's increasingly aggressive market interventions to deal with the worst financial crisis in more than a half-century.

"I'm sure there are some of my friends out there saying, I thought this guy was a market guy; what happened to him? Well, my first instinct wasn't to lay out a huge government plan. My first instinct was to let the market work until I realized, upon being briefed by the experts, of how significant this problem became," Bush said then.

The Federal Reserve, meanwhile, announced that it will begin buying vast amounts of short-term debt on Oct. 27 — its latest effort to break through a credit clog. The Fed is invoking Depression-era emergency powers to buy commercial paper — a crucial short-term funding that many companies rely on to pay their workers and buy supplies. Last week the Fed said it intended to take the action but didn't specify when.

The economy's problems also are taking their toll on the government's coffers. The 2008 budget deficit hit an all-time high of $454.8 billion. The red ink probably will be a lot worse next year as the costs of the government's rescue of the financial system and the economic hard times clobber the federal balance sheet, economists predict.