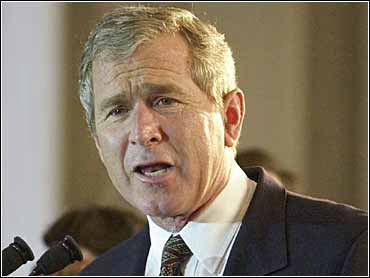 George W. Bush will be a no-show at the Christian Coalition's upcoming convention.

The GOP presidential nominee will skip the event - which begins Friday - since an appearance would "conflict with our debate preparations this weekend," Bush campaign spokesman Ari Fleischer told The New York Times, referring to the Texas governor's first debate with Vice President Al Gore next week. Bush's running mate, Dick Cheney, will also be a no-show.

It's the latest example of how Bush is keeping a public distance from conservative groups at the core of the Republican base, while at the same time counting on their support in ways beyond the media spotlight.

For example, the National Rifle Association has tentatively decided not to endorse a presidential candidate this year in order to help Bush. Their thinking is that an NRA endorsement would give ammunition to Democrat Gore, especially with moderate, undecided swing voters in key battleground states.

But neither the NRA, the Christian Coalition, nor other conservative groups sitting out the fall campaign for the White House. With millions of dollars, they're mobilizing phone banks, ads, and get-out-the-vote efforts - all hammering away on abortion, gun control, and Gore's character.

Even so, Bush's balancing act between his base and those undecideds is a delicate one. The Rev. Pat Robertson, the Christian Coalition's founder and a Bush backer, warned that the GOP standard-bearer risked neglecting conservatives by skipping his event.

"It takes a lot of energy and effort to get out and work precincts and lick envelopes and go to churches," Robertson was quoted in the Times. "If you want the troops to go out and fall on their swords for you, it doesn't hurt for the general to stand up and say, 'I need your help.'"

Robertson also expressed concern that the Democratic ticket could siphon votes away from conservatives thanks to Gore's running mate Joe Lieberman touting his faith and blasting Hollywood.

"With Lieberman, there's going to be some defection on moral issues," he said, "and they (the Bush campaign) have to be aware of that."

Of Bush's chances in November, Robertson said, "They're very iffy. They've lost the commanding lead they had. Republicans have a marvelous facility for snatching defeat from the jaws of victory."

Less critical was Gary Bauer, the family values advocate who ran against Bush in the GOP primaries. Bauer had no serious quibbles with the Bush campaign strategy, but - like Robertson - urged a greater emphasis on social issues.

"The party could still do more on a variety of values issues where the division between Gore and Bush remains substantial," Bauer told the Times, "everything from the Boy Scouts issue to Hollywood."