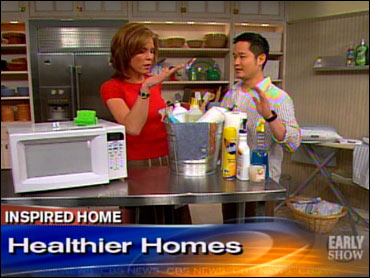 President Bush says he's deeply concerned about high energy prices, but he refused repeatedly Friday to endorse any quick fix other than his tax cut.

"To the Congress who's interested in helping consumers pay high gas prices: pass the tax relief as quickly as possible. That's the quickest way to help consumers," said Mr. Bush.

With the summer driving and power crunch just weeks away, the president said the long-term solution is to build more refineries and power plants. For now, reports CBS News Correspondent Bill Plante, the tax cut is all Mr. Bush has to offer hard-pressed consumers. It won't go far.

Democrats scoff at the president's assertion that the tax cut is all that's needed.

"We need to have some national action to deal with energy problems and its not adequate to just say we're going to cut peoples taxes eventually and that should do it," said Jeff Bingaman, D-NM.

Bush said Saturday that conservation was a key element of his administration's energy strategy, which will be unveiled this week, and that he would recommend investing in new and better ways to save energy.

In his weekly radio address, Bush gave a few hints of some of the elements in his national energy strategy, which will be rolled out Thursday by Bush and Vice President Dick Cheney.

"Energy is a problem that my administration will address," Bush said. "This week, we will introduce a comprehensive energy plan to help bring new supplies of energy to the market, and we will be encouraging Americans to use more wisely the energy supplies that exist today."

Green groups have been gearing up to fight the White house plan because they say it focuses too heavily on new drilling on federal lands.

Bush and Cheney, who has also worked in the oil business, received big campaign contributions from energy firms during last year's presidential election. Some environmentalists say the new energy plan would amount to a ``thank you'' gift for the oil industry.

The energy blueprint being unveiled next week also will call for relaxing clean air rules to give refiners more flexibility in producing and distributing gasoline and ease regulatory barriers to nuclear power plant construction, sources said, speaking on the condition of anonymity.

Democrats and Republicans have hammered the administration in recent days for proposing deep spending cuts for renewable energy programs, such as solar and ind, and in government research into technology that would increase energy efficiency and conservation.

And New York Congresswoman Nita Lowey gave President Bush an "F" for his education policy. In the Democrats' weekly radio address, she accused Bush of giving education programs short shrift to make room in the budget for his tax cut.

Click here to learn more about U.S. energy use.
Click here to learn more about alternative energy in the U.S.
Energy Secretary Spencer Abraham has defended the cuts, including slashing solar and wind research money by 50 percent. But he suggested Thursday at a Senate hearing that some of those funds may be restored, subject to recommendations and priorities set by the energy task force.

And CBS News Chief White House Correspondent John Roberts reports White House officials said they have not closed the door to a temporary rollback of the 18 cent a gallon tax on gasoline.

"We have to look at the long term - but we also have a short term crisis on our hands that we have to deal with as well," said Rep. Elton Gallegly, R-CA.

Republicans, who face close election battles to protect a razor thin margin next year, have told the White House they need more than "long term strategies" to take back to their districts when they break for Memorial Day.

Democrats Thursday hammered the president for ignoring a crisis.

"The lights are out in California and the question is - is anyone home at the White House?" said Sen. Joseph Liberman, D-CT.

Taking the pressure off gas prices may be easier and there appears to be growing support on Capitol Hill for the tax holiday.

"Last year when I was in the Senate I proposed a suspension of the federal gas tax, I couldn't get 40 votes for it then but I'm not sure that'd be the same case today," said Abraham.

Privately some Republicans say that won't be enough; their constituents need help now and won't forget it if they don't get it.

Mr. Bush, however, made it sound easy during the presidential campaign.

"What I think the president ought to do," he said in January 2000, when heating oil prices were soaring in key campaign states, "is he ought to get on the phone with the OPEC cartel and say, 'We expect you to open your spigots!'"

Since then, gasoline prices have crept above $2 per gallon with some suggesting that the Midwest could see pump prices hit the unthinkable $3 per gallon level. California, in a preview of a summer of woes, experienced its sixth day of blackouts Tuesday.

The Republican National Cmmittee, which pays for polling used by Mr. Bush's advisers, has surveys that show the economy overtaking education for the first time in years as voters' top issue. The margin is narrow in RNC polls, but much wider in favor of the economy in public polls.

One senior Republican close to Mr. Bush said there are rising fears of a "Carter factor."

But the president's allies say he won't fall into the Carter trap because the administration's soon-to-be-released energy plan will show him at least trying to ease costs.