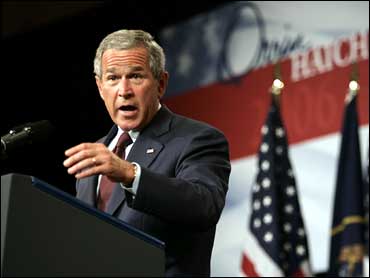 President George W. Bush said Thursday the war against Islamic militants was like last century's fight against Nazis and communists and that a U.S. withdrawal from Iraq would lead to its conquest by America's worst enemies.

Although nearly 4,000 anti-war protesters demonstrated in downtown Salt Lake City, Mr. Bush picked one of the most hawkish groups, in one of the most conservative states, as his audience for remaking his case for the war in Iraq, reports CBS News chief White House correspondent Jim Axelrod.

His speech before the American Legion convention in Utah, was the first in a series of Iraq speeches by Mr. Bush at a time when just 33 percent of Americans approve of his handling of the war, according to an AP-Ipsos poll.

With just 10 weeks until Election Day, the president's public relations offensive gives him a way to handle his biggest weakness – the war in Iraq by absorbing it into his biggest strength – the War on Terror, Axelrod reports.

"Some politicians look at our efforts in Iraq and see a diversion from the war on terror," Mr. Bush said. "That would come as news to Osama bin Laden, who proclaimed that the 'third world war is raging' in Iraq."

The president's reference to a battle against Nazism echoed recent speeches by other administration officials. In a speech at the American Legion convention earlier this week, Defense Secretary Donald Rumsfeld said the world faces "a new type of fascism." And he warned against repeating the pre-World War II mistake of appeasement.

With national security a cornerstone of his campaign strategy, Mr. Bush will mark the fifth anniversary of the Sept. 11 attacks by visiting all three sites where terrorists crashed hijacked planes, in Washington, Pennsylvania and New York.

Mr. Bush noted that many people are frustrated with the unrelenting violence in Iraq and that some are calling for a timetable for withdrawal.

"Many of these folks are sincere and they're patriotic, but they could be — they could not be more wrong," Mr. Bush said.

Some Republicans, liked Rep. Christopher Shays, have joined with Democrats in seeking a withdrawal timetable.

"If America were to pull out before Iraq can defend itself, the consequences would be absolutely predictable — and absolutely disastrous," Mr. Bush said. "We would be handing Iraq over to our worst enemies."

Mr. Bush said Saddam sympathizers, armed groups backed by Iran and al Qaeda terrorists from across the world would use Iraq as a base of operation.

"They would have a new sanctuary to recruit and train terrorists at the heart of the Middle East, with huge oil riches to fund their ambitions," the president said. "And we know exactly where those ambitions lead. If we give up the fight in the streets of Baghdad, we will face the terrorists in the streets of our own cities."

Senate Democratic leader Harry Reid dismissed the president's remarks, the third set of such addresses within a year.

"No matter how many speeches the president gives, the truth is that his failed policies have taken the country in a dangerous direction," Reid said. "The American people know that five years after September 11th, we are not as safe as we should and could be. Iraq is in crisis, our military is stretched thin, and terrorist groups and extremist regimes have been strengthened and emboldened across the Middle East and the world. It is time for a new direction."

Mr. Bush's series of speeches are to continue Tuesday, with remarks in Washington before the Military Officers Association of America and members of the diplomatic corps. It is to continue through Sept. 19, when the president is scheduled to address the U.N. General Assembly in New York.

The president said rising insurgency in Afghanistan would ultimately fail. He said international peacekeepers sent in to quell the conflict between Israel and Hezbollah would succeed in stopping the militant Islamic group from "acting as a state within a state."

He disputed claims that Iraq had descended into civil war, saying U.S. diplomats and military officials in Iraq say only a small fraction of Iraqis are engaged in sectarian violence.

And Mr. Bush accused Syria of sponsoring terrorism and said Iran was interfering in Iraq and pursuing nuclear weapons.

He said America's enemies include radical Sunnis who pledge allegiance to al Qaeda and militant Shiias who join groups like Hezbollah and take guidance from state sponsors like Syria and Iran. Yet, despite their differences, Mr. Bush said, they all subscribe to the same ideology that free societies are a threat to their "twisted view of Islam."