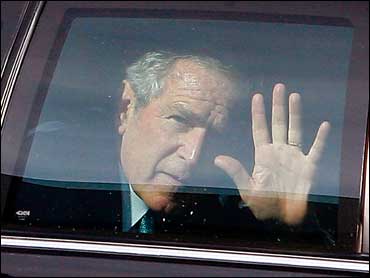 Former President George W. Bush said on Tuesday that he won't criticize Barack Obama because the new U.S. president "deserves my silence," and said he plans to write a book about the 12 toughest decisions he made in office.

"I'm not going to spend my time criticizing him. There are plenty of critics in the arena," Bush said. "He deserves my silence."

Bush said he wants Obama to succeed and said it's important that he has that support. Talk-show host Rush Limbaugh has said he hoped Obama would fail.

"I love my country a lot more than I love politics," Bush said. "I think it is essential that he be helped in office."

The president plans to give 10 speeches in Canada, Asia and Europe, of which this is the first, according to an AFP source. The Calgary event was billed as "A Conversation with George W. Bush."

According to the Washington Speaker's Bureau, the former president was offering "his thoughts on eight years in the Oval Office, the challenges facing our nation in the 21st century, the power of freedom, the role of faith, and other pressing issues."

Some guests reportedly paid more than 400 Canadian dollars ($315 U.S.) to attend the luncheon.

More than 200 protesters chanted "war criminal" and flung shoes outside the event, according to a CBS News report. At least two demonstrators were hauled away by police after brief skirmishes.

AFP reports that protesters amassed shoes from across the country to throw at an effigy of Mr. Bush outside the convention center. Colette Lemieux of the Canadian Peace Alliance said, "It doesn't matter that he is no longer president - a bank robber who stops holding up banks can and must still be prosecuted for his crimes."

Media were barred from covering the invitation-only event.

Bush is unpopular in Canada but less so in oil-rich Alberta, the country's most conservative province and one sometimes called the Texas of the north.

"This is my maiden voyage. My first speech since I was the president of the United States and I couldn't think of a better place to give it than Calgary, Canada," Bush said.

The event's organizers declined to say how much Bush was paid to speak at the gathering.

Bush said that he doesn't know what he will do in the long term but that he will write a book that will ask people to consider what they would do if they had to protect the United States as president.

He said it will be fun to write and that "it's going to be (about) the 12 toughest decisions I had to make."

"I'm going to put people in my place, so when the history of this administration is written at least there's an authoritarian voice saying exactly what happened," Bush said. 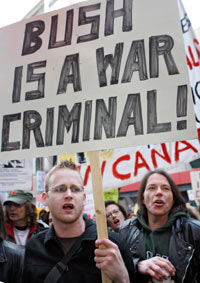 (CBS)
"I want people to understand what it was like to sit in the Oval Office and have them come in and say we have captured Khalid Sheik Mohammed, the mastermind of the Sept. 11 attacks, the alleged killer of a guy named Danny Pearl because he was simply Jewish, and we think we have information on further attacks on the United States," Bush said.

Bush didn't specify what the 12 hardest decisions were but said Iraq is better off without Saddam Hussein in power.

Bush was also full of jokes during his appearance. He joked that he would do more speeches to pay for his new house in Dallas.

"I actually paid for a house last fall. I think I'm the only American to have bought a house in the fall of 2008," he quipped.

He also said his mother is doing well. Barbara Bush was released from a Houston hospital Friday, nine days after undergoing heart surgery. "Clearly he can't live without her," Bush said of his father and former President George H.W. Bush.

Bush seemed to enjoy himself even though the event started a half later than expected because of tight security. "I'll sit here all day," Bush said during a question-and-answer session. "I'm flattered people even want to hear me in the first place."

Monday night, Mr. Bush had dinner out in Calgary, eating pasta and fruit salad; according to the Calgary Herald, he was a "jovial and friendly" guest who chatted and posed for pictures.