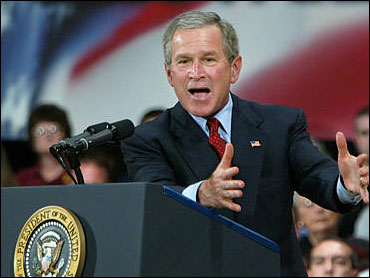 Looking for tax-cutting support in a battleground political state, President Bush said Monday that Congress is moving too slowly to approve the new tax relief he wants.

"The proposal I outlined four months ago was designed to address the specific weaknesses in our economy, and to remove obstacles that keep companies from hiring workers," Bush told 2,000 people hand-picked by the state GOP to cheer him on in a downtown convention hall. "Those obstacles still exist — Congress needs to move."

For his latest sales job, the White House chose the home state of Sen. Blanche Lincoln, a Democrat. She supported Bush on tax cuts two years ago but voted with most other senators in her party in March to halve Bush's proposal for $726 billion in new tax cuts and has expressed doubts about his centerpiece provision to eliminate taxes on dividends.

Invited to attend the Arkansas event, Lincoln said her schedule would keep her in Washington.

With the White House's lobbying focusing on a few defiant Republicans and some moderate Democrats like Lincoln, Bush has been going straight to the constituents of lawmakers in key states to argue his case.

Arkansas — like most of Bush's other travel destinations — also is strategic to Bush's 2004 re-election; he won it only narrowly in 2000.

The Senate, with a handful of Republicans joining most Democrats, has refused to go along with any more than $350 billion in tax cuts over 10 years. Bush has scaled back his expectations from his original $726 billion package, and is now calling for at least $550 billion — the amount agreed to by the House.

With most in Congress on record backing at least some tax cuts, the president urged the public to call to task those who oppose a larger package. That policy would do little to revive the economy, he has said.

Democrats argue the president's package is the wrong approach, because it would balloon the deficit and direct more of its benefits to upper-income Americans. But Bush has been citing new unemployment figures showing the rate jumped to 6 percent in April as reason for lawmakers to act his way.

"The good news is, the debate has shifted from no tax relief to how much tax relief," Bush said, pounding on a lectern set up before a huge, red-white-and-blue, White House-created "Jobs & Growth" banner. "And I got an idea: we need robust tax relief, we don't need a small tax-relief package."

Beforehand, the president met privately with local small-business owners and employees for about 40 minutes.

Bush spoke on a day when Senate Republicans were trying to fashion their approach to tax cuts in a chamber deeply divided over the issue.

Even Federal Reserve Chairman Alan Greenspan has undercut Bush's case, reiterating last week his previous position that any cuts should be offset by either spending reductions or other tax increases. And a recent ABC-Washington Post poll found Bush vulnerable on the issue.

The president visited Arkansas on his way back to Washington following a weekend at his Texas ranch, where he played host to Australian Prime Minister John Howard, and flew onto a homebound aircraft carrier off California to declare an end to major fighting in Iraq.

The White House is returning gradually to a prewar footing, with Bush's calendar stocked with events and travel unrelated to Iraq for a second week. His Arkansas stop was his first since the war began in which Bush devoted attention to economic matters — away from a military setting.

He delivered an assessment of the war on terror, saying its successes now include the defeat of Saddam Hussein's government in Baghdad. And Bush wasn't shy about recalling his triumphant visit to — and dramatic carrier-assisted landing on — the USS Abraham Lincoln last week.

"It was an unusual arrival," Bush said to laughs.

The president had been scheduled to meet Monday with Canadian Prime Minister Jean Chretien in Ottawa. But, with relations strained over Canada's opposition to the U.S.-led war in Iraq and a trade dispute over softwood lumber imports, the visit was "postponed" — with no new date — as advisers said Bush needed to focus instead on rebuilding Iraq.

II The Associated Press. All Rights Reserved. This material may not be published, broadcast, rewritten, or redistributed