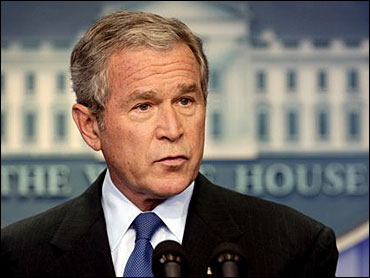 President Bush repeatedly refused to comment Thursday on reports that Israeli planes guided by ground forces attacked an installation - believed to be the beginnings of a nuclear project - in northern Syria on Sept. 6.

U.S. officials have told CBS News that the strike destroyed a building Israeli intelligence believed housed nuclear equipment, and that it was launched three days after a North Korean ship docked at a Syrian port.

Asked at a White House news conference whether North Korea was providing nuclear assistance to Syria, Mr. Bush said, "We expect them not to."

Both Syria and North Korea deny they are cooperating on a Syrian nuclear program.

Mr. Bush also denounced as "a sorry deal" and "disgusting" a newspaper ad by MoveOn.org that mocked Gen. David Petraeus, the top U.S. commander in Iraq. The ad accused Petraeus of "cooking the books" on Iraq and asked: "General Petraeus or General Betray Us?"

On other topics, Mr. Bush cited "some unsettling times" in the U.S. housing and credit markets, but sought to assure jittery Americans that the economy basically is in good shape despite worries about a recession.

"I say that the fundamentals of our nation's economy are strong," Mr. Bush said.

The president said that inflation is down, markets are steady, unemployment is relatively low, exports are up and corporate profits "seem to be strong."

"There is no question there are some unsettling times in the housing markets and credits associated with the housing market," the president told reporters. But he said he didn't see that spreading to the broader economy.

Some economists suggest the housing slump could lead to a recession even in spite of action earlier this week by the Federal Reserve to cut short-term interest rates by a half-percentage point.

Mr. Bush said he was optimistic about the economy. "I would be pessimistic if I thought Congress was going to get their way and raise taxes," he added.

Pressed on whether he was concerned that the nation was nearing a recession, Mr. Bush said, "You need to talk to an economist."

Mr. Bush also said his "feelings are not hurt" by criticism leveled at him in a new book by former Fed Chairman Alan Greenspan. "I respectfully disagree with Alan Greenspan when he says this administration didn't handle the fiscal issues we faced in good fashion," Mr. Bush said.

On the subject of Iraq, Mr. Bush said there was progress in local communities in Iraq but that people are disatisfied with the central government.

"Part of the reason why there's not this instant democracy in Iraq is because people are still recovering from Saddam Hussein's brutal rule. Sort of an intersting comment, I heard somebody say, `Where's Mandela?' Well, Mandela's dead because Saddam Hussein killed all the Mandelas."

It was a reference to the charismatic former leader of South Africa who helped reconcile his country after decades of racial division. Mandela is still alive.

Turning to Iran, Mr. Bush said it was important to take seriously threats being made by President Mahmoud Ahmadinejad, but that he was committed to working with other nations to convince the Iranian regime to peacefully give up any ambitions it has in developing a weapons program.

"The reason why is because it's very important for us to take the threats coming out of the mouth of the president of Iran very seriously," he said. "This is a person that consistently talks about the use of force on Israel, for example, and Israel is our very firm and strong ally."

He was asked about a recent statement by France's foreign minister that the international community should prepare for the possibility of war in the event Iran obtains atomic weapons - although he later stressed the focus is still on diplomatic pressures.

"I have consistently stated I am hopeful we can convince the Iranian regime to give up" any nuclear ambitions it has, Mr. Bush said.

He also defended the local New York officials' decision to deny permission to Ahmadinejad to lay a wreath at ground zero next week. "I can understand why they would not want somebody that's running a country that's a state sponsor of terror down there at the site," the president said.

The president opened the news conference with a statement challenging Democrats on their proposal for a $35 billion increase in a children's health insurance program. Mr. Bush has threatened to veto the bill.

CBS News correspondent Bob Fuss reports there is strong bipartisan support in Congress to raise cigarette taxes and add millions more kids to the program, but probably not enough to override a presidential veto.

The $35 billion increase for the State Children's Health Insurance Program, called SCHIP, would bring total spending to about $60 billion, or twice the level sought by the administration.

The president urged lawmakers to send him a simple extension of the current program - which expires at the end of this month - if both sides cannot agree on terms of a new measure.

"Members of Congress are putting poor children at risk so they can score political points in Washington," Mr. Bush said. He said that "more than a million children could lose health coverage" if the program is allowed to expire.

Mr. Bush spoke out for the first time about the case in Jena, La., in which six black teenagers were initially charged with attempted murder in the beating of a white classmate. He wouldn't comment on legal specifics. The case has attracted nationwide attention.

"The events in Louisiana have saddened me," the president said. "I understand the emotions."

He said the FBI is monitoring the situation, adding: "All of us in America want there to be, you know, fairness when it comes to justice."

Asked later how he responded to those who criticized him for not speaking out on the emotional case, Mr. Bush said it is an ongoing trial. "I feel strongly that there ought to be fair justice," he said. "I just spoke out on it."