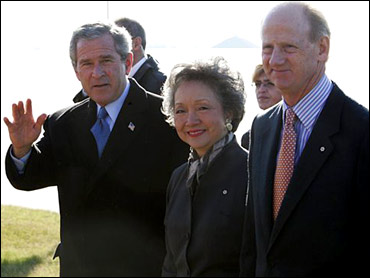 President Bush sought Tuesday to patch up relations with Canada after years of bickering, flying to the capital for talks with Prime Minister Paul Martin on trade, security and a host of tough hemispheric and global issues.

Air Force One landed outside Ottawa at mid-morning, and the president went straight to a meeting with Martin.

As his motorcade arrived at the Canadian Parliament building, hundreds of demonstrators jeered on the lawn outside. Organizers are expecting thousands later in the day.

Mr. Bush's arrival marked the first official visit to Canada by a U.S. president in nearly 10 years –a meeting that was akin to a political dance where the president was trying to avoid any missteps that could amplify anti-Americanism north of the U.S. border.

Relations between the Bush administration and Canada got off to a rocky start when Mr. Bush, as a new president, chose Mexico instead of Canada as the first country he'd visit. Trade disputes and the war in Iraq further soured the friendship.

Martin, Canada's former finance minister and a wealthy shipping magnate, however, has repeatedly expressed a desire to rebuild U.S.-Canada relations, which cooled under his predecessor, Jean Chretien. The dialogue became even more strained when Chretien decided against sending troops to Iraq — a decision supported by more than 80 percent of Canadians.

"Under Chretien, relations were terrible," John Hulsman, research fellow in foreign policy at Heritage Foundation, said of the former prime minister whose aide called Mr. Bush a "moron" in November 2002. "It got so bad that in the Parliament one time they forgot to turn the mikes off and someone was calling Bush a bastard."

Mr. Bush will not make a customary speech at the House of Commons in Ottawa where the sometimes raucous Parliament has been known to heckle speakers. Mr. Bush's unpopularity is expected to be protested by demonstrators upset about trade issues and Iraq. White House press secretary Scott McClellan shrugged off suggestions that the president feared hecklers, saying that Mr. Bush had elected to speak "directly to the Canadian people" Wednesday in Halifax, Nova Scotia.

Martin, who replaced Chretien in 2003, has always been seen as more pro-American.

"If you're the finance minister, whether you like it or not, you're next to the economic dynamo of the world, so you're going to engage that power whether you like them or not," Hulsman said. "I think you're going to see a much more businesslike relationship from Martin just because of what he's been doing for most of his adult life — and very successfully."

The two-day visit is focused on creating goodwill, but thorny economic issues will arise at the meeting between the leaders whose nations have the world's largest trading partnership. The United States and Canada do more than $1 billion in business a day; 85 percent of Canada's exports go to the United States.

President Bush and Prime Minister Martin also are expected to talk about security on the U.S.-Canada border, Canada's involvement in the U.S. continental missile defense program, the war on terrorism, efforts to expand democracy to other corners of the world and the situation in Iraq.

Canada stood with France and Germany in deciding not to send troops to Iraq, but pledged $300 million for reconstruction and is helping train Iraqi police officers in Jordan. Martin is expected to offer to send Canadian observers to help oversee January elections in Iraq.

U.S. officials accuse Canada of subsidizing the lumber business, saying it does not charge companies large enough to log on public lands. Canada is challenging the tariff through international trade organizations. The World Trade Organization has sided with Canada in a series of preliminary rulings, but the dispute is far from over.

Also, Canadian ranchers are upset about the U.S. ban on live Canadian cattle that was imposed after a lone case of mad cow disease was discovered in Alberta in May 2003. The United States is Canada's biggest beef customer, and the American ban has cost the Canadian cattle industry billions of dollars.

The United States and Canada are working jointly on environmental issues as well as health and safety standards and regulations that won't slow down trade and economic exchange, according to a senior administration official, who spoke on condition of anonymity.

On Wednesday, Mr. Bush will travel to Halifax to give a speech, thanking Halifax and other maritime provinces that received tens of thousands of Americans stranded after the Sept. 11, 2001 terrorist attacks. More than 200 jetliners heading for the United States were diverted to Canada after the terrorist attacks in New York and Washington. About 7,000 people on 44 planes went to Halifax.