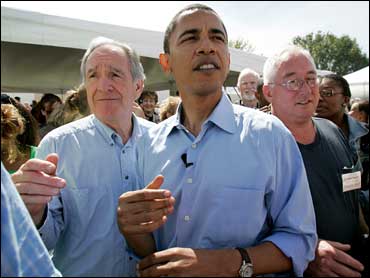 President Bush on Friday pressured China to help defuse a nuclear standoff with North Korea, and said "all options are on the table" as the United States seeks a solution to the crisis.

The president repeated that he believed the situation can still be resolved peacefully but notably ratcheted up the U.S. position by raising the suggestion of the use of a military strike.

Mr. Bush's comments come a day after North Korea warned that any attack on its nuclear facilities would trigger a "total war."

Concerns about North Korea's nuclear program grew this week when the country announced it had placed its nuclear facilities on "normal footing" after they had been frozen for almost a decade. That could mean that it will soon produce nuclear weapons.

Speaking of North Korean leader Kim Jong Il, President Bush said, "should he expect any aid for his people, he must conform with the world's demand that he not develop a nuclear weapon."

However, he added. "All options are on the table."

Mr. Bush said he called Chinese President Jiang Zemin Friday morning and "reminded him that we have a joint responsibility to uphold the goal that we talked about in Crawford, that goal being a nuclear-weapons-free peninsula."

The president said he had also raised the matter in recent days with the leaders of Japan and Russia.

By citing "all options," the president was reminding North Korea that the United States has not ruled out the use of military force.

U.S. officials have spoken before about their ability to respond to any potential hostile action by North Korea, in part to dispel any hopes Pyongyang may have about taking advantage of Mr. Bush's focus on Iraq. The nuclear standoff with North Korea, which intensified last fall, has complicated the president's efforts to rally the nation and skeptical world leaders behind his bid to disarm Saddam Hussein.

A recent survey in South Korea shows that most people favor the continued presence of the 37,500 U.S. troops based there to deter North Korea.

Mr. Bush deflected suggestions by Democrats that he is playing down the threat posed by North Korea's nuclear program because of his focus on Iraq. Some Democrats have called for immediate direct negotiations.

Administration officials said they believe problems with North Korea will be resolved through diplomacy, but do not want to start talks yet because they don't want to submit to North Korean threats.

North Korea is considered a potent military threat because it is believed to possess one or two nuclear bombs, and has missiles that can reach Japan and is developing others that could reach Hawaii and Alaska. It also has one of the world's largest armies.