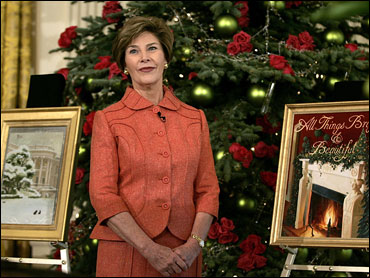 Some U.S. conservative Christians who received Christmas cards from the White House this month are grumbling that something was missing, Christmas.

As in every December since President George W. Bush took office, he sent out cards with a generic message, wishing 1.4 million supporters a happy "holiday season."

Bush "claims to be a born-again, evangelical Christian. But he sure doesn't act like one," Joseph Farah, editor of the conservative Web site WorldNetDaily.com, told The Washington Post. "I threw out my White House card as soon as I got it."

Other conservatives on the Bushes' list accused the first couple of giving in to a national push for more secular celebrations.

The cover of the cards, which were paid for by the Republican National Committee, show the presidential pets, two dogs and cat, playing in the snow on the White House lawn.

A spokeswoman for Laura Bush said while the first couple celebrates Christmas themselves, they wanted an inclusive greeting to be respectful of other traditions.

"Their cards in recent years have included best wishes for a holiday season, rather than Christmas wishes, because they are sent to people of all faiths," Susan Whitson said.

Last week Dennis Hastert, the Republican speaker of the House of Representatives, insisted that a tree on the grounds of the U.S. Capitol building should be called the Capitol Christmas Tree, not a holiday spruce.