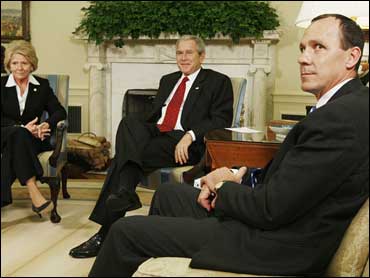 President Bush said Thursday that he has asked his transportation secretary to make sure that travelers delayed at airports are treated fairly.

"Endless hours sitting in an airplane on a runway with no communication between a pilot and the airport is just not right," he said.

Bush met in the Oval Office with Transportation Secretary Mary Peters and acting Federal Aviation Administrator Bobby Sturgell. The president urged Congress to look at legislation to modernize the FAA so citizens won't be inconvenienced.

The administration is focusing in particular on John F. Kennedy International Airport, where airlines schedule about 57 flights and hour during the morning rush, even though the runways can only accommodate 44, reports CBS News correspondent Nancy Cordes.

It's a guarantee for delays.

The president is creating a new rulemaking committee made up of New York aviation officials and the airlines, adds Cordes. They will have until December to find ways to cut delays.

"We've got a problem," Bush said. "We understand there's a problem. And we're going to address the problem."

Earlier Thursday, airline executives spoke out against one of the options being considered as Congress and the Bush administration try to improve air service, forcing airlines to pay more to fly during peak travel periods. That wouldn't mitigate the record delays, the executives said.

The airline industry's on-time performance in the first seven months of 2007 was its worst since comparable data began being collected in 1995, according to government data. In July, the most recent month for which data are available, 20 carriers reported an on-time arrival rate of 69.8 percent, down from 73.7 percent a year earlier.

Commercial airline executives blame a large part of the air-traffic jams on runways and in the skies - particularly in the Northeast - on the growing use of tiny jets among corporations and wealthy individuals.

But Steve Brown, senior vice president of operations for the National Business Aviation Association, on Wednesday said government data show general aviation accounts for less than 4 percent of all aircraft operations at the nation's 10 busiest airports.