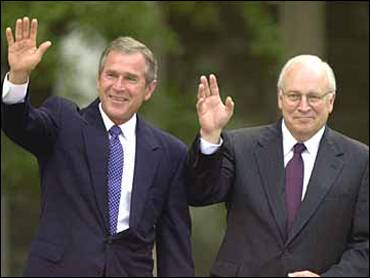 President Bush reported Thursday that his family had assets between $8.8 million and $21.9 million at the end of last year.

Vice President Dick Cheney valued his assets at between $19.1 million and $86.4 million.

The figures came in annual financial disclosure forms that public officials and certain government-paid advisers must file with the Office of Government Ethics. Under federal law, the officials may report the value of their assets, income and debts within broad ranges. The deadline was Thursday.

The ranges were comparable to those they reported last year. In 2001, the president and first lady Laura Bush reported assets between $9 million and $19 million; Cheney and his wife, Lynne, reported between $23 million and $70 million.

The documents also showed presidential gifts Mr. Bush has decided to keep — worth $14,254 in all.

They included a boat and boat dock valued at $5,728 from John L. Morris' bass pro shops in Springfield, Mo.; eight Rolling Stones tickets for the president's daughter, Jenna Bush, with a price of $2,533; a $1,000 cowboy hat decorated with a silver Lone Star on its band; and a puzzle valued at $1,707 from the White House staff.

Other gifts — all valued under $1,000 — included two Rolling Stones tickets for Jenna Bush; cufflinks; a hardcover copy of "To Kill a Mockingbird" signed by author Harper Lee; shoes; an unframed 1865 map of Texas; and an honorary membership to The Yale Club of New York City.

Mr. Bush owns millions of dollars in Treasury notes. The biggest single asset he lists on the form is his 1,583-acre ranch in central Texas, valued at between $1 million and $5 million.

His money is also spread over certificates of deposit in Providian National Bank, Banco Santander and Household Bank.

The Bushes maintained trusts worth up to $1.1 million for each of their daughters, much of it in stocks that included Cisco, the Gap, IBM, Microsoft Corp., Procter and Gamble and Pfizer Inc.

The forms listed Lucent Technologies and WorldCom stock as part of their two daughters' trusts in 2001. The Bushes apparently dumped those equities last year as Lucent revenues plunged amid a severe slump in the telecommunications industry, and scandal-plagued WorldCom went bankrupt.

Last month, Mr. Bush reported $856,056 in adjusted gross income for 2002. The disclosure forms showed the great majority of that came from interest income.

The forms also suggested Mr. Bush has little to gain personally from his drive to abolish the personal income tax on dividends. A tiny fraction of his income came from dividends — between $3,707 and $13,600.

The bulk of the assets amassed by the Cheneys is held in just seven investment funds — totaling between $15 million and $75 million. The vice president's assets also included undeveloped real estate in McLean, Va., worth $1 million to $5 million.

Many honored the Wyoming native's love of fly fishing. He received a Sage fly rod and Lamson reel worth $600 from two Portland, Ore., men; a $3,400 bronze sculpture of two trout from an Oregon artist; three handmade fly rods together worth $2,200, from men in Wyoming, Idaho and Texas; and a $1,500 Bogdan Salmon reel.

Other gifts included two 2002 Olympic USA leather jackets and two 2002 Olympic parkas; a $600 hand-carved wooden folk-art figuring from Rep. Jim Leach, R-Iowa and his wife; a $350 "Wyoming Santa" needlepoint Christmas decoration; a $4,200 bronze sculpture of a baby elephant; and, from the White House staff, a $580 framed Currier and Ives lithograph.

On their 2002 federal tax return filed last month, the Cheneys reported a total of $1.2 million in adjusted gross income. The forms Thursday showed he collected $162,392 in deferred compensation from Halliburton Co., the Dallas-based energy services company he headed until Aug. 16, 2000.

Cheney elected in 1998 to recoup over five years a portion of the money he made in 1999 as chief executive officer of Halliburton.

Other income came from capital gains, dividends and interest.

In addition, Lynne Cheney drew an unspecified salary from the American Enterprise Institute, a Washington-based think tank, and compensation as a member of several boards. The $100,000 to $1 million in royalties she received from Simon & Schuster for her book "America: A Patriotic Primer" were all donated to charity.