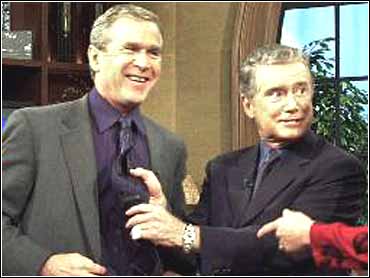 Appearing Thursday morning on Live With Regis, Bush told host Regis Philbin and guest co-host Susan Hawk - one of the finalists on the summer CBS “reality” show - that he watched the popular program.

"I was fascinated to see who was going to survive," he said. "It was kind of like me."

Bush strode onstage wearing a dark suit, shirt and tie made popular by Philbin, who wore an almost identical suit. The outfit prompted the host to say, "He gave Oprah a kiss, but he wore my shirt and tie."

Asked by Philbin to say in one sentence why he should be president, Bush said, "I'm going to call upon the nation to usher in a period of personal responsibility. I want each and every American to know for certain that I'm responsible for the decisions I make and each of you are as well."

With the appearance, Bush reached an estimated 5 million viewers - more than half of them women. Polls have shown female voters with a preference have given Gore his strongest lead in months. A Gallup survey released Monday showed the vice president ahead by 17 points.

The latest poll from the Pew Research Center showed Gore leading among women on all the issues they consider most important, from Social Security and Medicare to health care and education. Gore also has an advantage on protecting and strengthening families, 44-37, among women.

But Bush believes his message will resonate if women hear more about his proposals to hold schools accountable for student performance and learn of his dedication to his family.

On Wednesday, Bush also continued his focus on the vice president's credibility.

“It seems like he must be auditioning for a Broadway play because he keeps changing his tune,” the Texas governor said.

Gore raised $4.2 million for the Democratic National Committee on Monday night in Beverly Hills, Calif., a week after he gave the entertainment industry six months to take steps to make sure violent films are not marketed to children and suggested sanctions if nothing is done.

“At the beginning of the week, he sounded awfully tough on Hollywood. He talked about six months, sanctions. He talked a tough line,” Bush said. “After a couple of fund-raisers, he's changed his tune.”

At the California fund-raiser, Gore and running mate Joseph Lieberman eased their rhetoric. “We will nudge you but we will never become censors,” Lieberman said.

Bush said he opposes censorship too. But he said that if he is elected he will summon industry leaders “and explain to them, loud and clear, that our country needto do a better job of raising our children.”

Kym Spell, a Gore campaign spokeswoman, denied any Gore flip-flop. “Al Gore, unlike George Bush, is not afraid to disagree with his friends,” she said. “Al Gore has repeatedly said that we need to stop the marketing of violence to our children. George Bush has yet to say what his approach would be.”