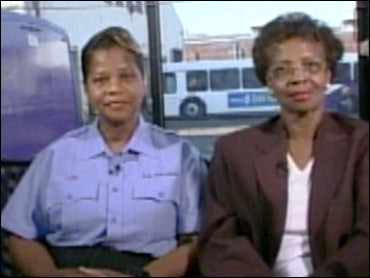 A routine evening turned into a very scary ride for a Richmond, Va., bus driver and her passengers when a flash flood from remnants of Tropical Storm Gaston engulfed the bus in four feet of water.

"I was going to die," driver Robbie Williams tells The Early Show co-anchor Rene Syler. "It actually frightened me. I'm still not myself as of yet. I have flashbacks of what happened."

A surveillance camera on the bus captured the tense moments as Williams and her passengers pulled a struggling motorist - trapped in the rising waters - into the relative safety of the bus.

The drama started when Williams called her GRTC dispatcher, to report that her bus was stuck in the flood. "He said help was on the way," she recalls.

At the time, the dispatcher was listening to a police scanner and heard that a woman in the car next to the bus was on the phone with 911 trapped in her nearly submerged Honda as the water continued to rise.

"He told me to look to my left. There was a white car to my left. He said, 'Is there anything you can do to help the passenger in that car?'" Williams recalls. "So that's when I got up and went to the window."

So along with passenger Cheryl Ellett and another passenger identified only as Ernest, Williams pushed the emergergency window open. "Cheryl actually went out on the hood of the car and pulled JoAnne, the passenger, inside the bus."

The water in the car was up to the girl's waist and she was crying. "She needed help so I got out and tapped on her windshield with my hand and said, 'Come on, come on,'" Ellett says. "The water was rushing over the top of the hood. Her car was filling up with water on the inside. It was almost to the dashboard and I couldn't see her sitting there like that. We just saw one woman get out of her car and she went floating on down Main Street."

Once the motorist was safely in the bus, Williams says, she started thinking about what to do next.

"We were really thinking of a plan of attack," she says. "Just in case that water rose higher on the bus. How were we going to get off the bus? We were thinking about maybe we should go through the hatch and stay on top of the bus."

It took three hours for the fire department to rescue them, getting everybody off the bus to safety, two at a time.