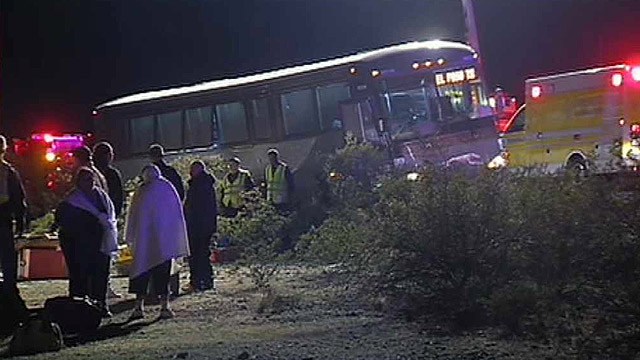 TONOPAH, Ariz. -- A passenger attacked the driver of a Greyhound bus, causing a crash on Interstate 10 in western Arizona that left 24 people injured, state police said. Passengers and law enforcement officials are hailing the driver as a hero after he fended off the attacks, CBS affiliate KPHO reported.

The Dallas-bound bus was heading east from Los Angeles when the crash occurred near Tonopah shortly before 2 a.m. Thursday.

The bus crossed the highway median, but came to a stop before entering westbound traffic when other passengers restrained the man who had been pummeling the driver, the Arizona Department of Public Safety said.

The bus remained upright and none of the 24 people taken to hospitals had life-threatening injuries, the DPS said.

"(The driver) did a tremendous job," passenger Gregory Fort of Oakland, Calif., told KPHO. "I drive this route every week. The guy was beating him uncontrollably, hitting him in the face, head. There is nothing anyone could have done better. He deserves a merit for handling bus the way he did."

Graves said the attacker reportedly was hallucinating and indicated he wanted to get off the bus. The man was taken to a hospital for a drug-induced condition, Graves said.

The injuries included a broken sternum suffered by one of the passengers who helped restrain the attacker, said DPS Officer Carrick Cook, another DPS spokesman.

The alleged attacker and a female companion got off the bus when it stopped and ran off into the desert, but he was arrested when they returned 30 minutes later, the DPS said.

Maquel Donyel Morris, 25, of Los Angeles will be booked into jail on suspicion of numerous counts of endangerment, assault and aggravated assault, the DPS said.

Greyhound spokeswoman Alexandra Pedrini said the bus was carrying 41 passengers, plus the driver.

A relief bus was sent to the accident scene to take the nearly 20 uninjured passengers to Phoenix so they could continue to their final destinations, she said.

Westbound lanes of I-10 were closed for 30 minutes so helicopters could land.