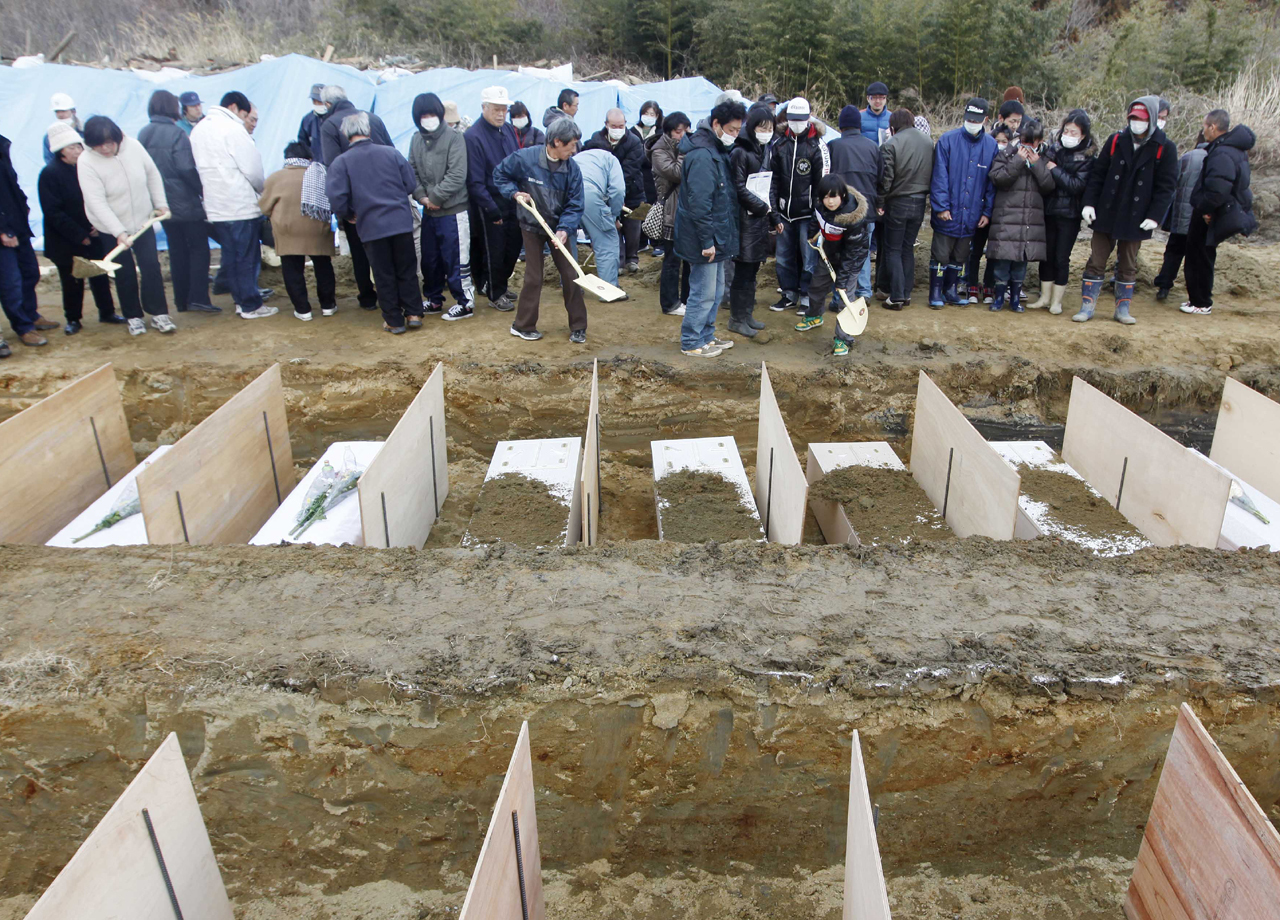 YAMAMOTO, Japan - The funeral for Chieko Mori's daughter and granddaughter was an affront to Japanese sacred customs — the two were placed in simple wooden coffins that soldiers lowered into a ditch in a vegetable patch as a backhoe poured in earth, burying them alongside scores of other bodies.

Such an unceremonious disposal of the dead would be unthinkable in Japan in normal times. But the devastating March 11 earthquake and tsunami have left a huge backlog of thousands of bodies in makeshift morgues, leaving local governments no choice but to bury them in hastily-dug mass graves.

In small-town Japan, the funeral is an elaborate and highly formalized Buddhist ritual, in which the body is washed, dressed and cremated, the ashes interred at the family tomb.

So this — mass graves, heavy machinery, improvised rites — is almost unbearable, a tragedy that robs both survivors and the dead of closure.

Since the tragedy, Mori has been in a deep shock and doesn't always respond when spoken to. Her husband, son-in-law, and another granddaughter are also dead, and they will be buried in mass graves in upcoming days. Her sister, Tomiko Sato, came from a nearby town to attend the funeral on Saturday, to relieve Mori of the burden.

"We were told at town hall that they didn't have the resources, and if we wanted proper cremations we could drive the bodies to Yamagata ourselves," Sato said, referring to a neighboring prefecture about 50 miles to the west — too far to travel with gasoline so scarce.

"But this is a temporary grave, and the government said they would cremate the bodies within two years, so we can move them to the family grave."

Saturday's mass burial was the first in Yamamoto, a town of 16,700 with about 1,000 dead or missing. Eleven uniform plywood caskets were buried, with 400 more planned in the coming days. A Buddhist priest apologized for the conditions before chanting traditional hymns, and relatives pried off the lids to caress the dead, placing garbage bags full of their belongings inside and later sobbing as white-gloved troops hoisted the coffins away.

For Sato, just finding the bodies was an achievement — she borrowed gas for her car and circled local evacuee centers for two weeks to track down the whole family, who grew strawberries in a coastal area where many houses are completely destroyed. The last to be found was Honoka, a granddaughter in junior high school, whose body was damaged beyond recognition.

"She wasn't wearing her school uniform, but her teacher contacted her boyfriend, who told us about a necklace and a bracelet he had given her. She was wearing both," she said.

The last time the whole family got together was in early December, for take-out sushi at the Mori family's now destroyed home.

The setting at Yamamoto was in stark contrast to a burial earlier in the day at Higashimatsushima, a town about 40 miles north up the coast. Soldiers there had dug pits in a muddy field at a recycling center, and a morning ceremony took place in freezing rain, against a backdrop of cubes of crushed plastic bottles and stacks of fluorescent light tubes.

Many relatives were bused in from evacuee centers and arrived in sweat pants and tennis shoes. Soldiers lowered coffins into the long ditches, and an official with a bullhorn called out the names of the dead, apologizing when he mispronounced one. Mourners in white masks sobbed from beneath their umbrellas.

"We lost my wife's father in the tsunami. He wasn't my grandfather, but we were very close, and I called him 'gramps.' He was a very kind man — he didn't like to drink but would always buy me a nice bottle of sake," said Koji Ushigome.

His father-in-law, Yuichi Takahashi, died in the tsunami at age 81, and was lowered into the ground in a white wooden coffin, with the number "670" written on the side in black magic marker. Officials were carefully noting the location of the coffins so the remains can one day be exhumed and receive a proper burial.

Officials stressed the temporary nature of the burials, and said they had little choice given the vast number of bodies. The official death toll from the quake and tsunami has passed 10,100, with more than 17,000 listed as missing

Behind him, three cars full of mourners pulled up in the parking lot for the next set of bodies.