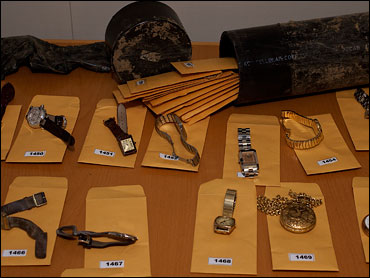 Just like on an old-fashioned pirate map, X marked the spot.

But instead of a desert island, police dug under a San Fernando Valley freeway underpass Tuesday, and the stash of jewelry recovered appears to be loot lifted by a convicted burglar.

An attorney for Roberto Caveda provided the hand-drawn map to detectives. It led them to the dirt of a California Department of Transportation right of way near the Ronald Reagan Freeway in Granada Hills.

With the roar of traffic as a backdrop, officers dug 12 to 14 inches down and found a 2-foot-long black plastic pipe, Detective Bill Schultz said.

Inside were socks stuffed with jewelry, including gold chains and necklaces, a jeweled bird pendant, diamond rings and Rolex watches.

Altogether, the haul might be worth hundreds of thousands of dollars, police said.

"My heart jumped out of my throat," Detective Bill Longacre said.

"It was like digging around in a cave and finding the pirate's treasure chest. But we can't keep it," he said with a chuckle.

Caveda, 30, was arrested in February 2006 for a series of local thefts that included a $10-million Degas painting and $2 million in jewelry, which were recovered.

He was convicted last year of 16 counts of burglary, receiving stolen property and attempted escape. He was scheduled to be sentenced Thursday and could get eight to 10 years in prison, police said.

Police suspected he committed at least 28 and possibly as many as 80 burglaries around Los Angeles and in local suburbs over 17 months beginning in late 2004.

Sometimes, he cleaned up after ransacking rooms so the thefts wouldn't be detected until later, police said.

Caveda melted down some precious metals into ingots that he sold to local jewelers, police said.

But much of the loot was stored.

"He kept it for up to two years, all of it," Longacre said. "He didn't fence it. He didn't need it for money. He did it for the thrill."

Caveda drew the map while being held at the downtown Twin Towers jail pending his sentencing.

The map included measurements in meters and how far down to dig.

"I was shocked," said his attorney, Mark Bledstein, who faxed the map to police. "I mean, to have a map like that and it's right there where the guy says it is?"

"He just felt it was the right thing to do," Bledstein said. "He's been telling me how bad he felt after seeing all these old people testify (at his trial)."

Police now will catalog the jewelry and try to return it to the owners, investigators said.