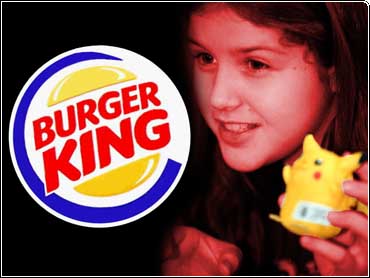 Burger King is recalling millions of plastic balls that hold wildly popular Pokemon toys given away in kids' meals after a 13-month-old California girl suffocated when one covered her mouth and nose.

It's not the Pokemon toy, but the little plastic ball the toy comes in that's cause for concern, reports CBS News Correspondent Lou Miliano.

"More than 25 million of the 'Poke' balls are part of the recall," Charles Nicolas, a Burger King spokesman in Miami, said Monday. "That's because they may pose a suffocation hazard for children under 3 years of age."

The balls used to pack 57 different types of Pokemon toys measure from 2¾ inches to three inches in diameter and can be opened by pulling their two halves apart to reveal a toy inside.

A 13-month-old Sonora, Calif., girl had stopped breathing by the time she was found in her playpen with half a ball over her nose and mouth on Dec. 11. The Tuolumne County Sheriff's Department issued a warning about the balls following her death.

"Consumers should immediately take the balls away from children under the age of 3. They should discard the ball or return both halves of the ball to a Burger King restaurant for a free order of small french fries," the Miami-based restaurant chain said in a statement. "Consumers may continue to use the Pokemon toy that came inside the ball."

The balls have been distributed at Burger King restaurants for the past two months.

"They've passed all choke tests," said Nicolas. "What's at issue is when the ball covers both the mouth and the nose...This has been a voluntary recall on the part of Burger King. We made the decision. We initiated it."

Burger King will keep distributing Pokemon toys in the balls with Burger King Big Kids' Meals, but they will no longer be included in regular kids club meals.