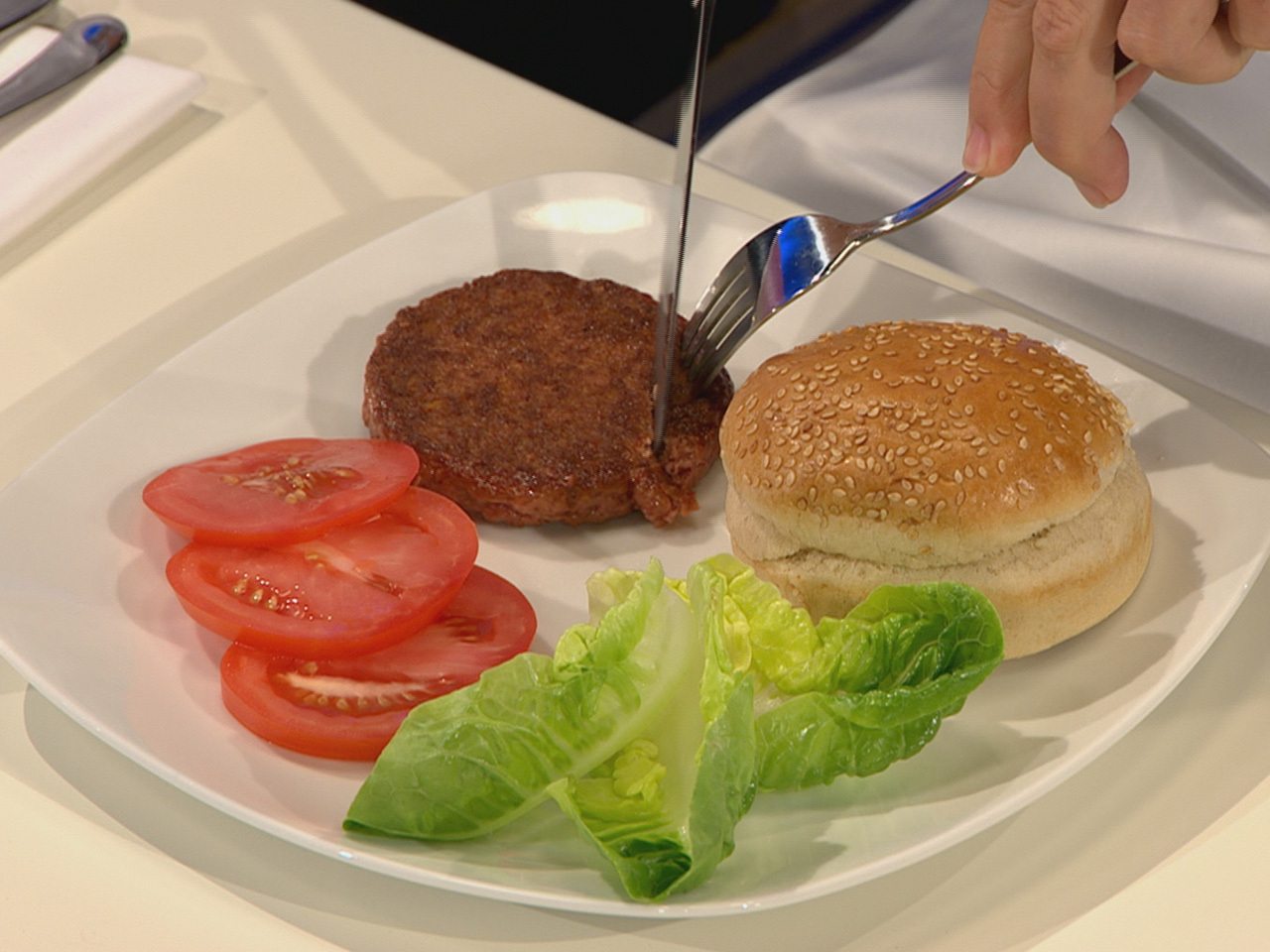 But it's no ordinary hamburger that two volunteer taste-testers tucked into in London on Monday. The meat was grown in a laboratory, from cattle stem cells.

The perfectly round patty was pan fried in sunflower oil and butter and then sampled by Josh Schonwald, author of The Taste of Tomorrow, and food scientist Hanni Rutzler.

It was "close to meat," according to Rutzler, but she said she expected it to be softer and as the petri-dish beef contains no fat, it wasn't very juicy.

Schonwald also noted the absence of fat, which translated into a lesser flavor, "but the bite feels like a conventional hamburger"

Mark Post, whose team at Maastricht University in the Netherlands developed the burger, hopes that making meat in labs could eventually help feed the world and fight climate change.

Monday's taste test, coming after five years of research, is a key step toward making lab meat a culinary phenomenon.

"For the burger to succeed it has to look, feel and taste like the real thing," Post said.

Post and colleagues made the meat from the muscle cells of two organic cows. The cells were put into a nutrient solution to help them develop into muscle tissue, growing into small strands of meat.

It took nearly 20,000 strands to make one 5-ounce patty, which for Monday's taste test was seasoned with salt, egg powder, breadcrumbs, red beet juice and saffron. The project cost $332,000.

"I'm a vegetarian, but I would be first in line to try this," said Jonathan Garlick, a stem cell researcher at Tufts University School of Dental Medicine in Boston. He has used similar techniques to make human skin but wasn't involved in the burger research.

Experts say new ways of producing meat are needed to satisfy growing carnivorous appetites without exhausting resources. By 2050, the Food and Agriculture Organization predicts global meat consumption will double as more people in developing countries can afford it. Raising animals destined for the dinner table takes up about 70 percent of all agricultural land.

The animal rights group PETA has thrown its support behind the lab-meat initiative.

"As long as there's anybody who's willing to kill a chicken, a cow or a pig to make their meal, we are all for this," said Ingrid Newkirk, PETA's president and co-founder. "Instead of the millions and billions (of animals) being slaughtered now, we could just clone a few cells to make burgers or chops."

If the burger doesn't taste right, some scientists say the flavor can easily be tweaked.

"Taste is the least (important) problem since this could be controlled by letting some of the stem cells develop into fat cells," said Stig Omholt, director of biotechnology at the Norwegian University of Life Sciences. Adding fat to the burgers this way would probably be healthier than getting it from naturally chunky cows, said Omholt, who was not involved in the project.

Post and his colleagues have tasted the meat in the lab, and he said they cooked a test burger on Sunday.

Even if tweaks improved the taste of the lab-grown meat, it would be years before such burgers hit the market.

"The first (lab-made) meat products are going to be very exclusive," said Isha Datar, director of New Harvest, an international nonprofit that promotes meat alternatives. "These burgers won't be in Happy Meals before someone rich and famous is eating them."