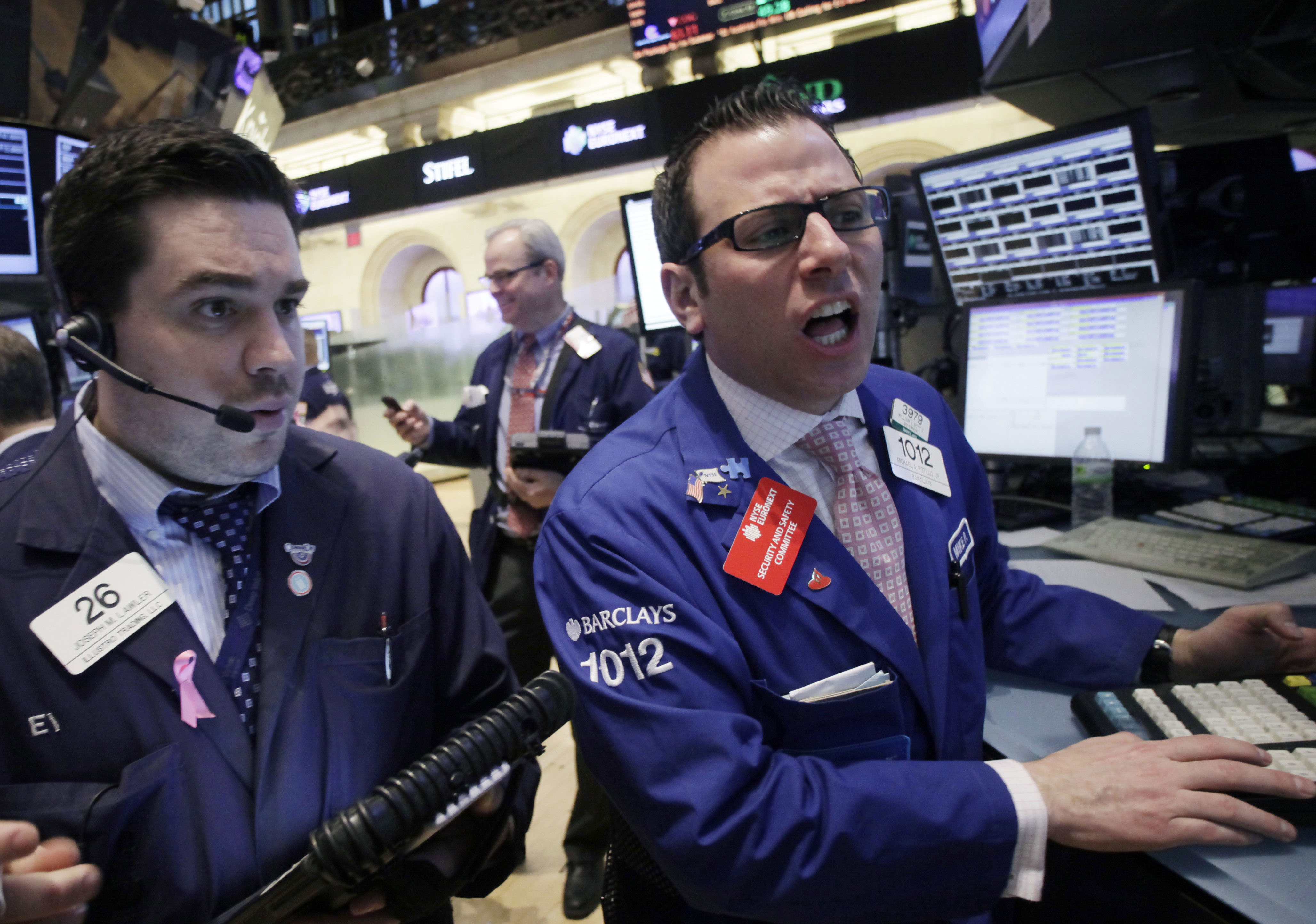 The Dow Jones industrial average surged past its record high and kept going on Tuesday. It jumped from the opening bell and gained 126 points to close at 14,254, breaking its previous record of 14,165 on Oct. 9, 2007.

The Dow opened higher following a surge in markets across the globe. China's markets rose after the government said it would support ambitious growth targets. European markets jumped following a surprisingly strong rise in retail sales across the 17-country group that uses the euro. In the U.S., more hopeful news about housing kept the momentum going.

The gains represent a remarkable comeback for the stock market. The Dow has more than doubled since falling to a low of 6,547 in March 2009 following the financial crisis and the Great Recession. Stocks have rebounded sharply since then, helped by stimulus from the Federal Reserve, even as the economic recovery has been slow and steady.

"Whether they want to admit it or not, everyone is very impressed with the resilience of the market," said Alec Young, a global equity strategist at S&P Capital IQ.

The last time the Dow was this high, Apple had just sold its first iPhone and George W. Bush had another year as president. The U.S. housing market had yet to bottom, and the financial crisis that brought down Lehman Brothers was still a year away.

The recovery in stocks may even have been quicker had memories of the financial system's near-collapse not been on investors' minds, said Robert Pavlik, chief market strategist at Banyan Partners.

"It's still pretty close to the front of people's brains," said Pavlik. "That's one of the reasons that people are hesitant to invest in the stock market."

That could be changing. More money has been flowing into stock mutual funds since the beginning of the year. Investors who have missed out on the run-up may be deciding to get off the sidelines, Pavlik said.

Even with stocks trading at, or close to, record levels, they are still a good investment because earnings have risen so much, said Darell Krasnoff, managing director at Bel Air investment Advisors.

"People get overly focused on benchmarks," said Krassnoff. "The fact that it's reached that level is an interesting landmark, but it doesn't say anything about whether the market is over- or under-valued."

Stocks are also attractive compared to bonds after a rally in the debt market that pushed yields to record lows.

Despite the rise in the Dow, the U.S. economy has not fared as well. Unemployment was just 4.7 percent when the Dow last reached a record five and half years ago, versus 7.9 percent today.

But the economy is strengthening in many areas. Housing is recovering, companies are hiring more and Corporate America's earnings are strong. That helped drive a 9 percent rise in stocks this year, impressing even the most ardent skeptics. For all of last year, the index rose 7 percent.

Stocks are also benefiting from the economic stimulus from the Federal Reserve and other global central banks.

Under a program called "quantitative easing," the Fed has bought trillions of dollars of bonds, pushing up their prices and sending their yields lower. That makes stocks more attractive to investors than bonds and keeps interest rates low throughout the economy, encouraging investment and spending.

The U.S. central bank began buying bonds in January 2009 and is still purchasing $85 billion each month in Treasury bonds and mortgage-backed securities.

That's a signal that investors are optimistic about the economy, since those companies stand to gain the most when the economy recovers. More stable, conservative stocks like utilities and consumer staples logged smaller gains.

From its March 2009 low to today, gains for the 30-member Dow have been led by American Express, up almost 500 percent. Home Depot has jumped almost 300 percent, according to data from S&P Dow Jones Indices. Hewlett-Packard is the only stock in the index that is lower than it was four years ago, falling 22 percent.

On Tuesday, investors received another piece of positive news on the U.S. economy, a report that U.S. service companies grew in February at the fastest pace in a year, thanks to higher sales and more new orders. The gain suggests higher taxes have yet to slow consumer spending on services.