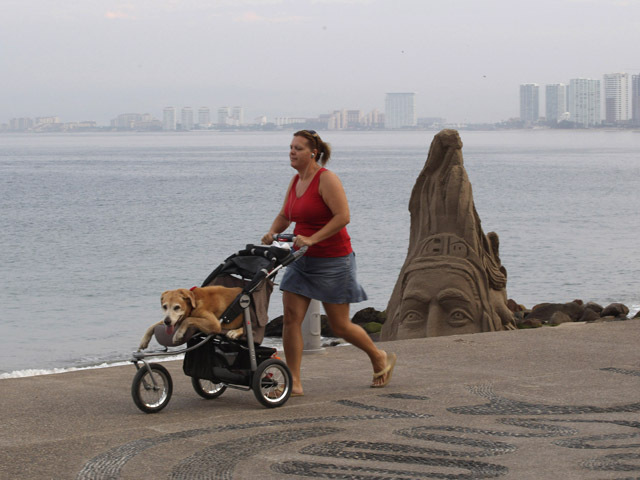 (AP) PUERTO VALLARTA, Mexico - Bud weakened to a tropical storm Friday as it headed toward a string of laid-back beach resorts and small mountain villages on Mexico's Pacific coast south of Puerto Vallarta. Two people, one of them from France, were reported missing in a separate storm in Cuba.

The National Hurricane Center in Miami, Florida, said that maximum sustained winds that were once blowing at 115 mph (185 kph) had slowed to 70 mph (113 kph) Friday night.

The government of Mexico changed the hurricane warning for the coast of Mexico from Manzanillo to Cabo Corrientes to a tropical storm warning. Hurricane watches were also discontinued.

Forecasters said the storm would continue to weaken and the center would move over land late Friday or Saturday.

Rainfall was expected to accumulate from 6 to 10 inches in many spots and Mexican authorities canceled school in 11 communities expected to be hit by heavy rains in Jalisco state. Emergency workers prepared emergency shelters, many of them in empty school classrooms.

Heavy rains and 6-foot (2-meter) high waves pelted Melaque, a beach town on the Bahia de Navidad, about 60 mph (100 kilometers) east of the sparsely populated stretch of coast where the storm's center was expected to come ashore during the night.

Rafael Galvez, manager of the Hotel Bahia in Melaque, said his staff would to board up windows before Bud's arrival.

"I went through Wilma in Cancun," which hit as a Category 4, Galvez said. "This is a little less severe."

"There was a lot of flooding in the whole area, and we lost electricity," Galvez recalled. But this week, he said, only seven of his hotel's 26 rooms were occupied, and none of the hotel's guests were planning to leave.

The hurricane center said the storm would hit land, move a little inland and then make a U-turn and head back out into the Pacific. Rain, rather than wind, could be the big threat, with the center warning of the "potential for life-threatening mudslides" in steep terrain inland.

The government of Jalisco state prepared hundreds of cots and dozens of heavy vehicles such as bulldozers that could be needed to move debris.

Jalisco's civil defense office said two shelters had been opened in Cihuatlan, a town just inland from Melaque that was hard hit by flooding from Jova.

The region is experienced at handling hurricanes, Galvez noted. "The government planning has helped a lot," he noted.

Officials in Puerto Vallarta said they were in close contact with managers of the hundreds of hotels in the city in case tourists need to move to eight emergency shelters. It said the sea along the city's famous beachfront was calm, but swimming had been temporarily banned as a precaution.

A separate storm was pounding much of Cuba and the Bahamas on Friday. Cuba's civil defense agency reported that a French citizen, Alain Manaud, and Silvestre Fortun Alvarez of Cuba were missing after trying to cross rain-swollen rivers, according to the government's Prensa Latina news agency. It said a search for them was continuing.

An official at the French Embassy in Havana said Manaud was 66 and had lived in Cuba for several years. He spoke on condition of anonymity because he was not authorized to comment publicly.

The agency quoted government meteorologists as saying more than 20 inches (500 millimeters) of rain had fallen on parts of the central province of Sancti Spiritus.

The U.S. hurricane center reported that the system had about a 70 percent chance of becoming a tropical or subtropical cyclone.