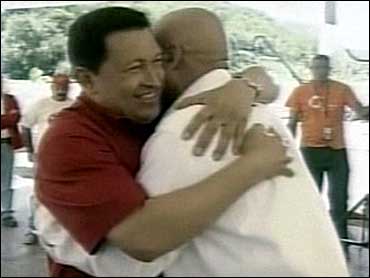 Both the Milwaukee Bucks and the Washington Wizards reached the .500 mark again Wednesday night. It was the Bucks who got there on the way up.

In a battle between two teams trying to shake off injuries and inch their way to the eighth and final playoff spot in the Eastern Conference, the Bucks took the upper hand by shutting down the Wizards in the fourth quarter for a 108-98 victory.

"We're still alive and kicking with 30 (games) to go," Milwaukee coach Chris Ford said. "We've just got to keep playing hard and try to stay above .500. We're not good enough to blow people out, but if we stay in games with people, we're OK."

The Bucks won because they were able to compensate for one missing starter better than than the Wizards were able to make up for two. Point guard Terrell Brandon missed his fifth straight game with a sprained ankle, but his replacement, Elliot Perry, scored a season-high 18 points and No. 2 guard Ray Allen came close to a triple-double with 25 points, 10 rebounds and seven assists.

"He's got 29 assists in the last four games," Ford said. "That's a lot of assists for a guy who's used to making his own shots."

The Wizards, meanwhile, lost their third straight and played their fifth in a row without starting forwards Chris Webber and Juwan Howard. Jumpers by Calbert Cheaney and Tracy Murray supplemented Rod Strickland's penetrating moves to keep Washington in the game for three quarters, but the Bucks changed their defense and kept a hand in the shooters' faces at the perimeter in the fourth quarter.

"They did a pretty good job fighting through the screens and taking away the jumper from us," said Cheaney, who scored just four of his 18 points in the second half.

With Strickland left to carry the load, the Wizards made only 6 of 20 shots in the final period and had only one field goal in the final 7:12 as Milwaukee finished the game with a 14-8 run. For the third straight game, Washington had nothing left in the tank at the end.

"Fatigue sets in, and we're just undermanned," Strickland said. "It's a big difference when you've got that security blanket and you drop it in to No. 4 (Webber) or No. 5 (Howard) and move out of the way."

Strickland, despite suffering from the flu, finished with 33 points, 11 assists and eight rebounds. Murray had 20 points, but he and Cheaney combined for just one field goal in the final quarter.

"Rod got out of bed and played a heck of a game," said Washington coach Bernie Bickerstaff, who was hoping for something better to start a seven-game home stand. "But to be candid with you, we need help."

Glenn Robinson added 21 points for the Bucks, who had plenty of go-to players down the stretch. Tyrone Hill scored eight of his 14 points in the fourth quarter.

Allen said there wasn't time left in the season for the Bucks to just glide along until Brandon's return, which isn't expected for another two weeks.

b>"Because `until' could be forever," Allen said. "These are the guys we have to go with. We have to make the best of it. This was a three-game road trip. To go home 2-1 and at .500 is going to be important. It should give us a tailwind."

Notes: Webber (strained right shoulder) practiced for the second straight day Wednesday morning, and is slightly ahead of Howard (sprained left ankle) in the Wizards' rehabilitation sweepstakes. Neither has been ruled out for Saturday's home game against Chicago. ... The Wizards have not dressed 12 healthy players since Jan. 16, 14 games ago. ... The Bucks' bench outscored the Wizards' bench 22-11. ... The Bucks, who next play Toronto, will be relieved that Damon Stoudamire is no longer with the Raptors. He scored a career-high 36 against them in a 92-91 victory at Skydome in December.