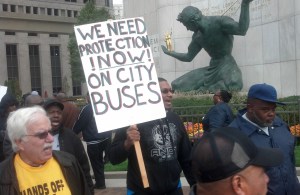 (CBS) DETROIT - Two weeks ago, bus drivers in Detroit staged a sick out to protest working conditions they say put their lives in danger. This weekend, another bus driver was attacked on the job - the target of a bucket of bleach, CBS Detroit reported.

A city bus driver reportedly opened the door at a stop near the old state fairgrounds on Eight Mile Road when witnesses say an attacker who was on the ground outside threw a bucket of bleach in his face. Police said it was premeditated.

The driver had to be taken to the hospital by ambulance, his condition is not yet known.

According to CBS Detroit, previous attacks have seen drivers beaten and stabbed, and even had urine thrown on them by irate passengers.

Vice President of the Amalgamated Transit Union Local 26 William Williams says he is not happy with the little that's been done to protect his workers.

Before the sick out, local Transit Union President Fred Westbrook said "It seems no one in the city government or the department cares." The union represents about 470 drivers.

Four drivers had been attacked the week the sick out was held in October. The bus system shut down, leaving thousands of Detroiters with no way to get to work or school.

To combat the problem, the U.S. Department of Transportation announced last month it was releasing $24 million for the repair and upgrade of Detroit buses, including the installation of security cameras. Police Chief James Craig said his department is also committed to protecting the bus drivers.

"We're going to stop the madness. We're not going to have what we've seen in some cities," Craig said last month.

Craig said the transit unit, which should be up and running within a few days, will include officers riding the buses in uniforms and in plainclothes.

"It will be a small unit initially and it will be tied into our concept process. As you know, our concept process is data driven so we will know where the activities are occurring," he said. "I'll let this be said now to the bad guys, we will run plainclothes details on that bus. So, if you want to clown, you want to engage in criminal behavior, there will be plainclothes police officers on that bus, especially if we know it's a problem location."