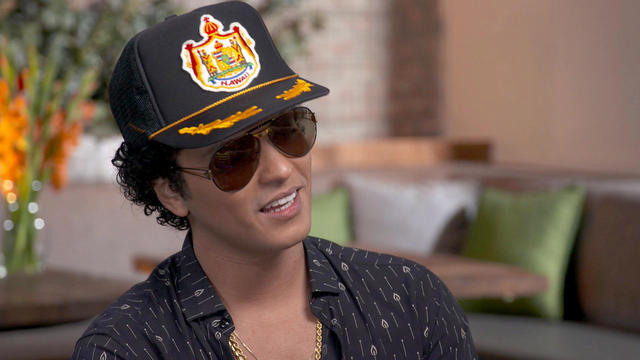 Bruno Mars has sold more than 180 million singles worldwide, making him one of the top-selling artists of all time. Now, Mars is making his primetime special debut Wednesday at 10 p.m. ET on CBS with "Bruno Mars: 24K Magic Live at the Apollo." "CBS This Morning" co-host Gayle King spoke with him at the Gansevoort Park Hotel in New York about reaching that legendary stage Harlem.

"We were running around Harlem like maniacs. We did a lot of things. We were just talking to just the locals," Mars said.

"What was beautiful about it so many people said, 'Yo, Bruno Mars, welcome to Harlem! It's good to have you in Harlem.' And I was like, 'Where else in the world are they gonna say that?' You know? I can't picture people in California like, 'Bruno! Welcome to Burbank.' You know, it's a different thing, like, this community of people. So proud."

One of the proudest landmarks of Harlem is the 103-year-old Apollo Theater where countless legendary entertainers have graced the stage. Now, it's his turn to bring his magic to the iconic venue with his debut primetime special.

"[I'm] over the moon about it. Because I've been very fortunate and blessed to be able to play all over the world. You know, I've played at a lot of incredible stages. The Apollo, knowing my history, is — I've never I never played that stage. I've never even been in the building," He said.

Mars said he grew up watching "Showtime at the Apollo" with his mother.

"It just reminded me of why I'm doing this," he said of the chance to perform there. "That Apollo stage is my philosophy in entertainment. Watching 'Showtime at the Apollo,' it's either you got it and they're gonna love you or you bomb and they're gonna boo you off the stage."

The star admitted the special is a bit "out of the box" for him.

"I always tell myself that I wanna make sure whenever I put out a concert or something like that, if I were ever to do some kind of concert DVD, I better make sure that I'm the best, you know, I captured – I'm the best me that I can be," he said.

For a showman like Mars, theatrics seem natural. So does that mean he has more TV plans?

"Are you thinking about acting?" King asked.

"Yes, I do. I'm thinking already that's your good side," King joked.

"That was it. That was the dramatic turn when Gayle asks a serious question."

The Red Hot Chili Peppers on 40 years of music
More