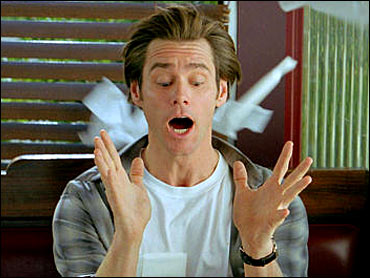 
From the television commercials, "Bruce Almighty" looks like Jim Carrey's big return to the kind of broad physical comedy he made his name with.

And it is - until about two-thirds of the way through, when it turns into a very special episode of "Touched by an Angel."

The tone turns from wacky to preachy with the speed of a lightning bolt from the heavens, which makes the film's marketing seem downright disingenuous. I half expected Kirk Cameron to show up and save the world from the apocalypse, again.

You have to have seen the commercials - they're on so frequently, they practically have their own cable channel - and they divulge the movie's every sight gag.

Carrey, as Buffalo TV reporter Bruce Nolan, receives the powers of God (Morgan Freeman) after suffering a crisis of faith, and uses them to part his tomato soup as if it were the Red Sea and give his girlfriend (Jennifer Aniston) bigger breasts. He makes fire hydrants explode and blows wind up a hot woman's dress for sheer amusement. And - ho, ho, get this! - he makes his naughty dog pee in the toilet, standing up on his hind legs.

Not that funny the first time - not that funny the 666th time. But the slapstick fits Carrey like a glove - or rather, like "The Mask," which "Bruce Almighty" alludes to when Bruce tosses out a casual "All righty, then."

Following Carrey's disappointing dramatic turn in "The Majestic" - his most recent attempt to be Taken Seriously As An Actor, in the tradition of "The Truman Show" and "Man on the Moon" - he's back doing what he does best, doing what his audiences love.

But then Tom Shadyac, who directed Carrey in "Ace Ventura: Pet Detective" and "Liar Liar," abruptly shifts the film's tone. Bruce also must deal with the burdens of playing God, which entails hearing people's prayers. That's fine, because it makes sense, but one quibble: The voices come to him selectively, when in theory, they should bombard him all the time.

One of the people he hears praying is his girlfriend - named Grace, naturally - who lies awake in bed at night sobbing, "Dear God, give Bruce strength." Later, Bruce falls to his knees in the pouring rain and cries out to God, "I surrender to your will!" It's all too heavy and heavy-handed to serve as a message with any real meaning.

Among the most grievous sins: The film wastes Aniston in the role of the supportive girlfriend, when she proved last year with "The Good Girl" that she's capable of doing so much more.

Freeman brings his typical stately presence - and to be fair, seeing him as God in "Bruce Almighty" is far preferable to the loose-cannon colonel he played earlier this year in the nightmarish "Dreamcatcher."

But even he couldn't keep this lapsed Catholic from praying that the film would end.