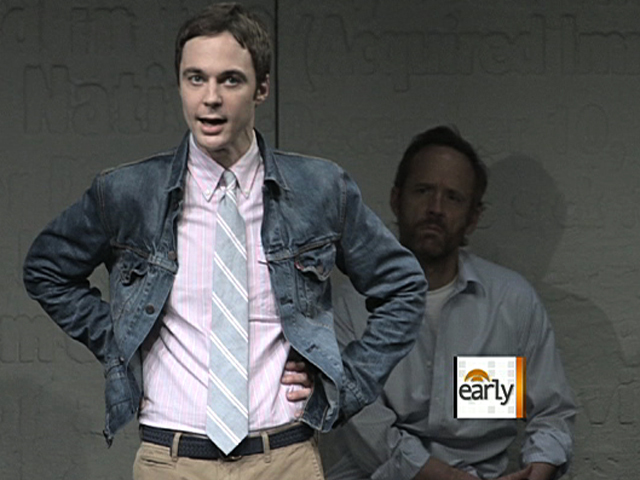 This week marks 30-years since the discovery of AIDS, and with the Tony Awards coming up this weekend, CBS News Correspondent Seth Doane took a look at a Broadway play that's about those first days of the AIDS epidemic.

"The Normal Heart" is one of the most highly praised plays of the season. The show has been nominated for five Tony Awards, including Best Revival. Originally opened in 1985, the new Broadway production is a moving reminder of how far we have come and how far we still have to go.

Pictures: Celebrities who died of AIDS
AIDS at 30

Doane reported on "The Early Show" the play was written over a quarter-century ago, but the heartache, fear and frustration is just as real today.

Taking place the early 1980s, "The Normal Heart" is all about AIDS. The word itself is never uttered because the disease was not identified yet - only its deadly consequences were.

Playwright Larry Kramer based the main character - Ned Weeks - on his own life - a man outraged at those ignoring the disease.

Kramer told CBS News, "The story is about somebody who - all his friends around him died - and he tried to make the system pay attention and the system wouldn't. ... It's my story."

Back in '81 - when those first cases appeared - "AIDS" was called a "gay cancer." Little was known, though much was feared.

2011 Tony nominee John Benjamin Hickey plays a New York Times writer who is in the "closet" too afraid to write about the disease that afflicting him.

Hickey said of the time, "It's impossible in the world we live in now with 35 million dead to think of the beginning of that disease and nobody knowing what to call it, or how you could get it."

As for acting in the play, Doane remarked to the playwright, "The actors told us that the director told them to think of this as a horror story."

Kramer said, "It was that - it's still a horror story."

AIDS rates continue to climb with 7,000 new cases identified worldwide every day, Doane said. That fact has given reason for Kramer to keep fighting.

For five of their eight shows, an actor told CBS News, Kramer can be found outside the theater handing out educational flyers to audience members about the state of the disease today.

Actress Ellen Barkin is also nominated for a Tony for her role as one of the first doctors to recognize the disease.

In the show, Barkin delivers a show-stopping monologue, saying, " Do you think that is is my good fortune to have the privilege of watching young men die?"

But Barkin's outrage isn't just on the stage.

Barkin told CBS News the disease is almost treated like any other STD that you have for life but you deal with.

"That's not true. It's a lie," she said. "If you can afford the drugs that are available - you're already in the top two percent in the population at least in this country. If you live in the third world - you can't afford these drugs at all."

Dr. Jonathan Jacobs, of Infectious Diseases at New York's Weill Cornell Medical Center, has been treating AIDS patients from the beginning of the epidemic.

Jacobs calls the disease an "illness of minorities."

He said, "It's an illness of people who do not have very good access to medical care."

He responded, "Oh the activists are definitely raising their voice for a good reason. Unfortunately, most of the activists from the early days have actually died of this disease, so there are fewer left."

But with "The Normal Heart" now on Broadway, Kramer is now effecting a new generation of audiences.

Doane said, "When I watched the play, there were people in tears all around me by the end."

Kramer said, "Good. I wrote this play to make people cry. Good. It's the saddest thing I've ever known. ... AIDS. The whole thing - not just the illness the fact that people died needlessly, that's what makes you cry."

Doane added on "The Early Show" that the real names of those who have died because of AIDS are projected on the stage - a tragic list that only continues to grow.

You can see the Tony Awards this Sunday night at 8/7c on CBS.