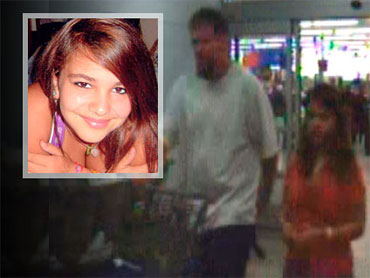 Police are looking for a 12-year-old girl who went missing this week after her mother was found dead in their Roanoke, Va., home Monday.

On "The Early Show," CBS News correspondent Jeff Glor reported police are investigating the death of Tina Smith as a possible homicide. And they now believe Smith's boyfriend may have kidnapped her daughter.

Police are desperately searching for Brittany Mae Smith. She's been missing for five days. The body of her mother, who was 41, was found Monday.

Smith's 32-year-old boyfriend, Jeffrey Easley, is now suspected of taking Brittany, Glor says. Police have released a photo of the two leaving a Walmart on Friday. Easley used Tina Smith's credit card to buy some items. His own family is now imploring him to bring Brittany back.

Sallie Martin, Easley's mother, pleaded, "If you would just take her somewhere and drop her off, call 911, give me a call, come to the house, do whatever you need to do, we'll work this out."

Easley and Tina Smith met online, and authorities say he moved in with her in October.

Anti-Aging Products, Do They Work?

An Internet exchange last Friday between mother and daughter indicated some troubles at home.

On Brittany Mae's MySpace page, Smith wrote to her daughter, "Everything happens for a reason, Britt. I-L-Y" ("I love you").

Jeffrey Easley also responded, writing, "I love you too. Trust me. Everything will work out."

An Amber Alert was issued on Monday. Easley drives a 2005 silver Dodge Neon.

Police say Brittany may have left with Easley willingly, hinting there may have been some kind of relationship, but they warn that she may be in danger.

Glor added police may know the cause of Tina's death later today, when autopsy results are released.

Roanoke County Police Chief Ray Lavinder, who is overseeing the investigation, said on "The Early Show" Wednesday he doesn't know if Brittany and Easley are together.

"It's been almost a week since we've had any information that they have been together or been seen," he said. "And it gives us a great deal of concern. But, at this point in time, I think we have to go on the theory that they're still together and they're still in that gray Dodge."

"Early Show" co-anchor Erica Hill noted there's been speculation about the actual nature of the relationship between Brittany and Easley. She asked Lavinder, "Is there any further information on them this morning? Does that Walmart video, did that show you anything in particular that gave you a clue as to their relationship?"

Lavinder replied, "No, it didn't give us anything that would indicate any type of a relationship."

As for Tina Smith's death, Lavinder said they "haven't really concentrated on that homicide."

He said, "Our main objective at this point is to find the 12-year-old girl and I think once we find her, that'll open a lot of doors for us. And we can concentrate on the homicide investigation."

Hill said, "I know as part of your investigation to find Brittany you've monitored social networks and put pleas out for information on MySpace, Twitter, Facebook. Are you learning anything from some of those social networking sites, from some postings there?"

Lavinder answered, "No, that's kind of a frustration for us. We haven't been able to get the cooperation from some of the social media centers like Facebook and -- that we would like to have and we feel like there may be some helpful information there, but we simply have not gotten the cooperation we would like at this time."

Hill remarked that online exchanges between Brittany and her mother, as indicated by Glor, perhaps alluded to a difficult time between the two.
But Lavinder said they don't have any information that the relationship was strained.

"As far as we know, you know, the mother and daughter were doing some shopping or some errands together on Friday morning," he said. "So, we really don't have any positive information that anything like that was going on."