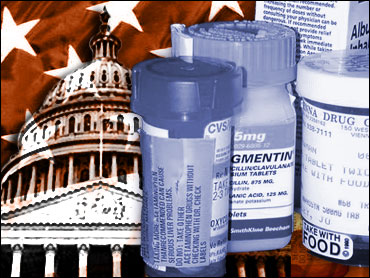 The House ethics committee said Wednesday it will begin an investigation to determine whether Rep. Nick Smith, R-Mich., was offered a bribe to vote for the Medicare drug bill.

The panel issued a brief statement saying it will announce the members of a subcommittee to look into the matter but will have no other comment until a final report is issued.

Smith also issued a statement. "I respect the committee's decision and believe that the committee should be permitted to conduct its work without further public comment by any party," he said.

The drug bill, which passed last fall after years of aborted attempts, is already embroiled in controversy over whether the Bush administration hid estimates of its cost. The Congressional Budget Office projected the drug benefit would cost $395 billion over 10 years, but the White House recently said it thought the cost would be closer to $534 billion.

Separately, the General Accounting Office has reviewed advertisements promoting the Medicare bill, after charges that they were inaccurate and constituted a use of taxpayer funds for material promoting one of President Bush's chief domestic accomplishments.

Smith was among several lawmakers lobbied heavily by GOP leaders last November to vote for the measure. It narrowly passed but Smith voted against it because he said it was too expensive.

After the vote, Smith told a radio station that Republican colleagues had offered $100,000 in campaign cash for his son, Brad, if he voted for the bill. The younger Smith is running to replace his father, who is retiring.

Smith later backed away from the allegation, saying that someone outside Congress had offered his son "substantial and aggressive campaign support" and Smith assumed that meant financial support. But he said it was "technically incorrect" to say money was offered.

Smith has refused to say which lawmakers or business interests were involved. But he said Wednesday he will cooperate with the investigation.

In its statement announcing the probe, the House Committee on Standards of Official Conduct said, "Anyone having first-hand knowledge of this matter is encouraged to contact the Committee office."

House Speaker Dennis Hastert, R-Ill., has denied that Smith was offered anything in return for his vote.

Although the charges raised the ire of Democrats, Minority Leader Nancy Pelosi, D-Calif., and others refused to formally request an ethics investigation of Smith. Lawmakers have been reluctant to break a truce on requests for ethics investigations that began in 1997. The ethics committee has investigated just five cases since that time.

House Democratic Whip Steny Hoyer, D-Md., who had urged the committee to investigate Smith, said Wednesday he hoped everyone involved will cooperate with the investigation.

"I believe that this is an appropriate and necessary action and the only way that the House can remove the cloud of suspicion that hangs over this matter to this day," Hoyer said.

Also Wednesday, the White House embraced calls for an investigation into whether the government's former Medicare chief pressured a subordinate to sit on cost estimates of the Medicare legislation.

Those estimates — higher than those projected by congressional budget analysts — have yet to be made public or turned over to congressional Democrats who have requested them.

Thompson said Tuesday his staff is gathering the documents.

In an hour-long meeting with reporters, Thompson did not dispute the thrust of a story by The Associated Press in June that Thomas Scully, who ran the Medicare agency until December, threatened to fire his top actuary, Rick Foster, if Foster released his calculations to Democrats.

Scully has said his comments were "heated rhetoric in middle of the night."

Foster estimated in June that a version similar to what became law would cost $551 billion, according to a document subsequently obtained and released by House Democrats.

The New York Times reports a Democratic aide on Capitol Hill, Cybele Bjorklund, claims to have received an anonymous fax in January reporting a $551 billion cost estimate made in June. The fax arrived after she claims she asked for the figure for months and was rebuffed by Scully, who threatened to fire Foster if he revealed the number.

"There seems to be a cloud over this department because of this. We have nothing to hide, so I want to make darn sure everything comes out," Thompson said.

Democrats applauded Thompson's request, but Sen. Edward Kennedy, D-Mass., said questions still remain about why the president, Thompson and other officials continued to say the legislation would cost $400 billion "when their best estimate was that it would cost much more?"

Thompson said administration officials made clear that their financial assumptions about the legislation led to higher estimates. But he said he did not see the final estimated cost until just before Christmas, a few weeks after Mr. Bush signed the Medicare law.

Thompson said he never instructed Scully to prevent Foster from sharing his higher cost estimates with lawmakers, some of whom said they would not vote for legislation that cost more than $400 billion over 10 years.

Scott Whitaker, Thompson's top aide, said he telephoned Foster in June at Thompson's request to reassure him his job was safe.

The secretary placed much of the responsibility for the controversy on Scully, a voluble lawyer and former hospital trade association executive known for his quick wit and sometimes impulsive comments.

Scully did not respond to efforts to reach him Tuesday.

The difference between the White House figure of $534 billion and the $395 billion estimate by the Congressional Budget Office is due to different assumptions about how many people will use the benefit and how the drug market will respond, according to CBO.