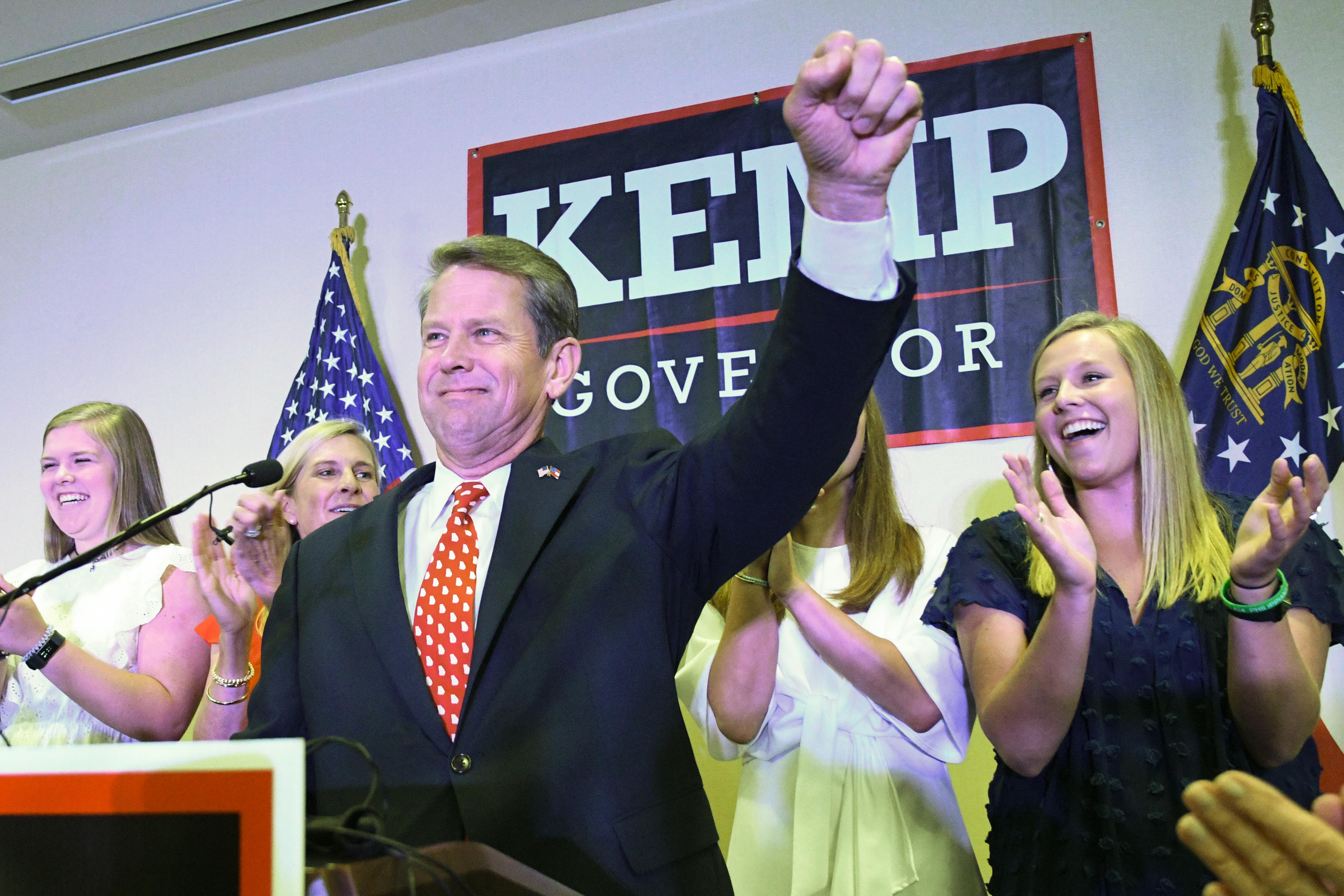 ATLANTA -- With a damning secret recording of his opponent and a Trump-Pence endorsement late in the race, Secretary of State Brian Kemp won a bruising Republican runoff Tuesday in the race for Georgia governor. Kemp in November will face Democrat Stacey Abrams, who could become the first black woman governor.

A self-described "unapologetic conservative" whose campaign ran an eyebrow-raising ad that said he could use his own pickup truck to "round up criminal illegals," Kemp rode a national wave of voter contempt for the establishment in favor of bare-knuckled outsider politics.

The race will test Democrats' assertion that changing demographics have turned the Republican stronghold into a swing state.

Kemp beat once heavily-favored Lt. Gov. Casey Cagle, who outraised Kemp more than 2 to 1 and had a Rolodex of endorsements from establishment Republicans in the state including Gov. Nathan Deal. The NRA had thrown their support behind Cagle, CBS  Atlanta affiliate WGCL-TV reports.

In a tweeted endorsement last week, President Trump pointed to Kemp's tough stance on illegal immigration and strong support for gun rights. With days left in the race, Vice President Mike Pence also stumped for Kemp on the campaign trail. Both reiterated their support for Kemp in tweets Tuesday.

Kemp thanked supporters at a party in his hometown of Athens, Georgia, Tuesday night.

He said he had won a "clear, convincing victory" over Cagle and credited the White House's backing for sealing his win. He said Trump "poured gasoline in the fire" that fueled his victory.

He portrayed the race against her in November as a battle with the "radical left" as Georgia's future hangs in the balance.

Cagle asked his supporters to stand behind Secretary of State Brian Kemp's bid for governor.

After conceding the GOP runoff to Kemp, Cagle told supporters Kemp was "undeniably ready to lead this state."

Cagle began to lose ground after the release of a secret recording in June in which he says he helped pass a "bad public-policy" bill for political gain. The recording was made without Cagle's knowledge during a private conversation with former GOP gubernatorial rival Clay Tippins, who last week endorsed Kemp. Portions of the recording were released by Tippins and then by Kemp's campaign.

In a 50-second piece of the recording released in early July by Kemp's campaign, Cagle candidly discusses the GOP primary's sharp turn to the right, saying the five-man race came down to "who had the biggest gun, who had the biggest truck and who could be the craziest."

Cagle denied that his words amounted to criticism of Republican primary voters, saying they were aimed squarely at his opponent.

Kemp had received widespread criticism - and national headlines - with television ads in which he pretends to intimidate a young man interested in his daughter with a shotgun and says he has a big pickup truck "just in case I need to round up criminal illegals and take 'em home myself."

Kemp's opponents also hammered his record of securing voter data as secretary of state, in a line of attack likely to become a refrain for Abrams during the general election.

Cagle labeled Kemp "inKempetent," pointing to a 2015 incident in which Kemp's office inadvertently released Social Security numbers and other identifying information of millions of Georgia voters on disks sent to members of the media and political parties.

Kemp said a member of his staff was responsible for the error, that person was fired, and procedures were changed.

Kemp's office made headlines again last year after security experts disclosed a gaping security hole that wasn't fixed until six months after it was first reported to election authorities. Personal data was again exposed for Georgia's 6.7 million voters, as were passwords used by county officials to access files.

In the race ahead, Democrats point to a Georgia electorate that has become more urban and less white in recent decades as a sign they may be able to break the GOP winning streak for statewide office. Abrams already has star power, having garnered national attention when she won more than 76 percent of Democratic votes in her May 22 primary.