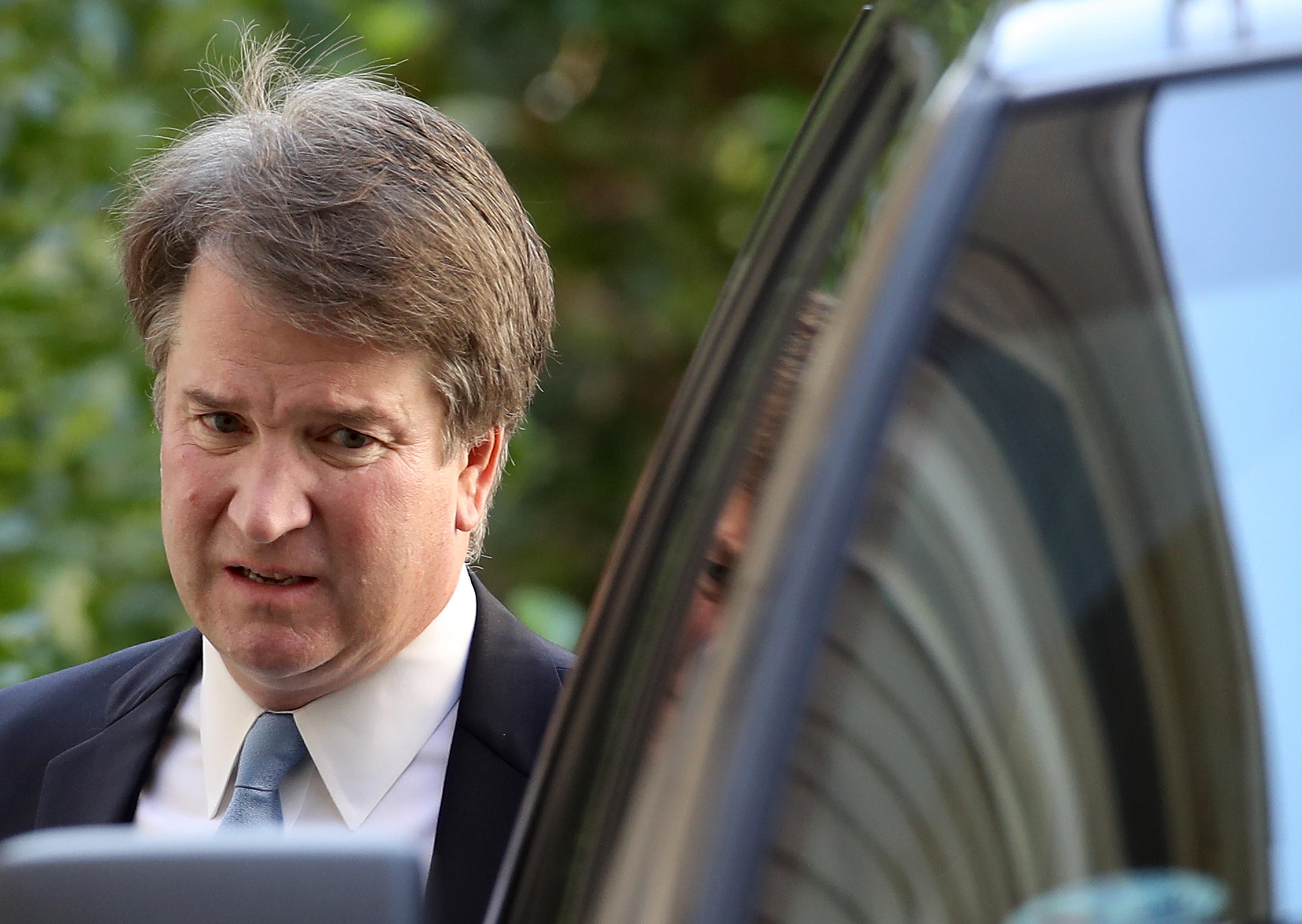 As Judge Brett Kavanaugh faces another allegation of sexual misconduct by a woman claiming he exposed himself to her at a party when they were both students at Yale University in the 1980s, President Trump is sticking by his pick to fill the vacancy on the United States Supreme Court, telling reporters Monday morning, "I am with him all the way." Here are some of today's highlights:

The latest allegation comes as Ford, who has accused Kavanaugh of assaulting her while they were both in high school, and Kavanaugh are expected to testify before the Senate Judiciary Committee on Thursday.

According to The New Yorker, 53-year-old Deborah Ramirez alleges Kavanaugh exposed himself to her at a party when they were both students at Yale University in the 1980s, something both Kavanaugh and the White House have denied.

Bromwich also raised the hiring by the committee of a sex crimes prosecutor, a move Ford's lawyers say is more appropriate to a criminal trial, and Bromwich restated their request that senators do the questioning of both Kavanaugh and Ford.

Kavanaugh, in his first television interview since allegations of past sexual misconduct emerged, told Fox News he's "never sexually assaulted anyone" and will not withdraw. His wife, Ashley, appeared alongside him in the interview with Fox News' Martha MacCallum.

Kavanaugh said President Trump called him this afternoon to tell him he's standing by him.

Christine Blasey Ford alleges Kavanaugh assaulted her while they were both in high school, and Deborah Ramirez, in a story published Sunday in the New Yorker, alleges Kavanaugh exposed himself to her at a party when they were in college. Ford and Kavanaugh are scheduled to testify before the Senate Judiciary Committee Thursday.

Kavanaugh told Fox News he "may have met" Ford at some point, but does not remember being at any parties with her, and says nothing ever happened between them. Asked about Ramirez' allegation, Kavanaugh said, "I never did any such thing," and said that such an incident, had it happened, "would have been the talk of campus."

"I want to be perfectly clear about what's taken place, Senate Democrats and their allies are trying to destroy a man's personal and professional life on the basis of decades old allegations that are unsubstantiated and uncorroborated," said McConnell. "This is what the so-called 'resistance' has become."

McConnell added that he expects Kavanaugh to receive an up or down vote on the Senate floor "in the near future."

In a personal letter from Christine Blasey Ford to Judiciary Chairman Chuck Grassley dated Sept. 22, Ford addressed her thought process about coming forward, and the manner in which she shared her story on the allegations against Kavanaugh. Yesterday, Chairman Grassley's staff requested Dr. Ford's consent for the letter's release as part of the public record.

"I thought that knowledge of his actions could be useful for you and those in charge of choosing among the various candidates. My original intent was first and foremost to be a helpful citizen -- in a confidential way that would minimize collateral damage to all families and friends involved," Ford wrote.

She added that she's been spending considerable time "managing death threats, avoiding people following me on freeways, and disconcerting media intrusion" in the wake of coming forward with her story.

"Currently, my family has physically relocated and have divided up separately on many nights with the tremendous help of friends in the broader community. Through gracious persons here and across the country, we have been able to afford hiring security," she adds.

Ford notes that while she's "frightened", her fear will "not hold me back from testifying." She implored the implored the senator to be treated with fair and respectful treatment" as she aims to provide the committee with "answers to all of your questions."

Kavanaugh: "I will not be intimidated into withdrawing from this process"

Kavanaugh told the Senate Judiciary Committee in a letter Monday that he "will not be intimidated" into withdrawing, calling the allegations against him a smear campaign.

"I have devoted my career to serving the public and the cause of justice, and particularly to promoting the equality and dignity of women. Women from every phase of my life have come forward to attest to my character. I am grateful to them. I owe it to them, and to my family, to defend my integrity and my name."

Michael Avenatti says client is "contemporary in age" with Kavanaugh

CBS News' Nancy Cordes reports that attorney Michael Avenatti says the reason his client has not gone public yet with her own allegations against Kavanaugh is because "we have to make sure security precautions are taken before we publicly release her identity…we have to make sure she's in a safe place." Avenatti's client is at least the third person to accuse the judge of sexual misconduct.

Avenatti says his client is "contemporary in age with Brett Kavanaugh" and graduated from a public school in the area around the same time as Kavanaugh. In a press conference, Avenatti said he'd release his client's name within 48 hours. He told reporters in Los Angeles that he was confident that people would find her claims to be credible, which, he continued, would be "disqualifying" for Kavanaugh's nomination. Though he did not reveal her name, Avenatti said that she has worked for government entities including the U.S. Mint, the Justice Department and the State Department and has held security clearances.

She "was in attendance with Kavanaugh and Judge at multiple parties" according to Avenatti. Cordes adds that according to tweets from Avenatti, in an email sent to Republicans on the Senate Judiciary Committee, his client is going to speak to incidents that happened in high school that have to do with a number of boys, including Kavanaugh, who would get young women drunk intentionally at parties on weekends and then attempt to sexually assault them.

"What we are witnessing is the total collapse of the traditional confirmation process for a Supreme Court nominee.  It is being replaced by a game of delay, deception, and wholesale character assassination. Clearly when it comes to President Trump, elections – in the eyes of Democrats – have no consequences," Sen. Lindsey Graham said in a statement on Monday.

He suggested that the confirmation process needs to move ahead with the hearing as currently scheduled for Thursday with a final committee vote "soon thereafter." Fellow Republican Sen. Tom Cotton of Arkansas echoed Graham, saying it was time to "end the character assassination" against Kavanaugh.

"The Democrats are engaged in a campaign of delay and character assassination against Judge Kavanaugh. It's time to vote this week," Cotton added.

After leaving his first event at the United Nations this week, Mr. Trump defended Kavanaugh when he was asked about his Supreme Court nominee by reporters.

"He's a fine man with an unblemished past and these are highly unsubstantiated statements represented by lawyers. You should look into the lawyers doing the representation. Judge Kavanaugh is an outstanding person, and I am with him all the way. We'll see how it goes in the Senate, we'll see how it goes with the vote," said Mr. Trump to cameras at the United Nations.

He added, "I think it could be, there's a chance that this could be one of the single most unfair, unjust things to happen to a candidate for anything but I am with Judge Kavanaugh and I look forward to a vote and for people to come out of the woodwork from 36 years ago and 30 years ago and never mention it and all the sudden it happens, in my opinion, it's totally political. It is totally political."

New Yorker author Jane Mayer on Kavanaugh allegations: "Let's get to the bottom of this"

One of the authors behind the latest account into accusations against Kavanaugh, Jane Mayer, told "CBS This Morning" that at a "certain point...there's things people won't say to a reporter that they might feel they need to say to the FBI."

"That's why everybody thinks let's get to the bottom of this. Let's figure it out," she urged. Mayer, along with New Yorker reporter Ronan Farrow, who has been behind several other stories reporting women's accounts of sexual harassment and assault carried out by high profile figures, reported an account by 53-year-old Deborah Ramirez who alleged Kavanaugh exposed himself to her at a party when they were both students at Yale University in the 1980s.

Mayer said that she felt the "public ought to know" about the latest allegations against Kavanaugh.

White House counselor Kellyanne Conway, speaking to "CBS This Morning" said that the allegations against Kavanaugh are "starting to feel like a vast left-wing conspiracy."

"I know there's pent-up demand for women to get their day, women who have been sexually harassed and sexually assaulted, and I personally am very aggrieved for all of them, but we cannot put decades of pent-up demand for women to feel whole on one man's shoulders. What exactly is the standard for ruining one man's life based on decades of allegations that have nothing to do with him?" said Conway.