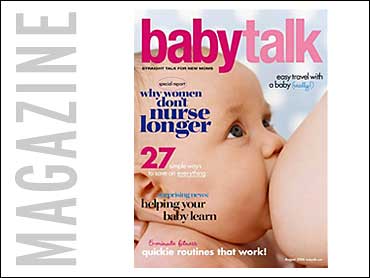 "I was SHOCKED to see a giant breast on the cover of your magazine," one person wrote. "I immediately turned the magazine face down," wrote another. "Gross," said a third.

These readers weren't complaining about a sexually explicit cover, but rather one of a baby nursing, on a wholesome parenting magazine, yet another sign that Americans are squeamish over the sight of a nursing breast, even as breast-feeding itself gains more support from the government and medical community.

Babytalk is a free magazine whose readership is overwhelmingly mothers of babies. Yet in a poll of more than 4,000 readers, a quarter of responses to the cover were negative, calling the photo a baby and part of a woman's breast, in profile, inappropriate.

One mother who didn't like the cover explains she was concerned about her 13-year-old son seeing it.

"I shredded it," said Gayle Ash, of Belton, Texas, in a telephone interview. "A breast is a breast, it's a sexual thing. He didn't need to see that."

It's the same reason that Ash, 41, who nursed all three of her children, is cautious about breast-feeding in public, a subject of enormous debate among women, which has even spawned a new term: "lactivists," meaning those who advocate for a woman's right to nurse wherever she needs to.

"I'm totally supportive of it, I just don't like the flashing," she says. "I don't want my son or husband to accidentally see a breast they didn't want to see."

Another mother, Kelly Wheatley, wrote Babytalk to applaud the cover, precisely because, she says, it helps educate people that breasts are more than sex objects. And yet Wheatley, 40, who's still nursing her 3-year-old daughter, rarely breast-feeds in public, partly because it's more comfortable in the car, and partly because her husband is uncomfortable with other men seeing her breast.

"Men are very visual," says Wheatley, 40, of Amarillo, Texas. "When they see a woman's breast, they see a breast, regardless of what it's being used for."

Babytalk editor Susan Kane says the mixed response to the cover clearly echoes the larger debate over breast-feeding in public. "There's a huge Puritanical streak in Americans," she says, "and there's a squeamishness about seeing a body part, even part of a body part."

"It's not like women are whipping them out with tassels on them!" she adds. "Mostly, they are trying to be discreet."

Kane says that since the August issue came out last week, the magazine has received more than 700 letters, more than for any article in years.

"Gross, I am sick of seeing a baby attached to a boob," wrote Lauren, a mother of a 4-month-old.

The evidence of public discomfort isn't just anecdotal. In a survey published in 2004 by the American Dietetic Association, less than half, 43 percent, of 3,719 respondents said women should have the right to breast-feed in public places.

The debate rages at a time when the celebrity-mom phenomenon has made breast-feeding perhaps more public than ever. Gwyneth Paltrow, Brooke Shields, Kate Hudson and Kate Beckinsale are only a few of the stars who've talked openly about their nursing experiences.

The celeb factor has even brought a measure of chic to that unsexiest of garments: the nursing bra. Gwen Stefani can be seen on Celebrity Baby Blog, sporting a leopard-print version from lingerie line Agent Provocateur. And fellow moms recognized a white one under Angelina Jolie's tank top on the cover of People. (Katie Holmes, meanwhile, suffered a maternity wardrobe malfunction when cameras caught her, nursing bra open and peeking out of her shirt, while on the town with fiance Tom Cruise.)

More seriously, the social and medical debate has intensified. The U.S. Department of Health and Human Services recently concluded a two-year breast-feeding awareness campaign including a TV ad, criticized as over-the-top even by some breast-feeding advocates, in which NOT breast-feeding was equated with the recklessness of a pregnant woman riding a mechanical bull.

There have been other measures to promote breast-feeding: in December, for example, Massachusetts banned hospitals from giving new mothers gift bags with free infant formula, a practice opponents said swayed some women away from nursing.

Most states now have laws guaranteeing the right to breast-feed where one chooses, and when a store or restaurant employee denies a woman that right, it has often resulted in public protests known as "nurse-ins": at a Starbucks in Miami, at Victoria's Secret stores in Racine, Wis., and Boston, and, last year, outside ABC headquarters in New York, when Barbara Walters made comments on "The View" seen by some women to denigrate breast-feeding in public.

"It's a new age," says Melinda Johnson, a registered dietitian and spokesperson for ADA. "With the government really getting behind breast-feeding, it's been a jumping-off point for mothers to be politically active. Mommies are organizing. It's a new trend to be a mommy activist."

Ultimately, it seems to be a highly personal matter. Caly Wood says she's "all for breast-feeding in public." She recalls with a shudder the time she sat nursing in a restaurant booth, and another woman walked by, glanced over and said, "Ugh, gross."

"My kid needed to eat," says the 29-year-old from South Abingdon, Mass. And she wasn't going to go hide in a not-so-clean restroom: "I don't send people to the bathroom when THEY want to eat," she says.

But Rebekah Kreutz thinks differently. One of six women who author SisterhoodSix, a blog on mothering issues, Kreutz didn't nurse her two daughters in public, and doesn't really feel comfortable seeing others do it.

"I respect it and think women have the right," says Kreutz, 34, of Bozeman, Mont. "But personally, it makes me really uncomfortable."

"I just think it's one of those moments that should stay between a mother and her child."