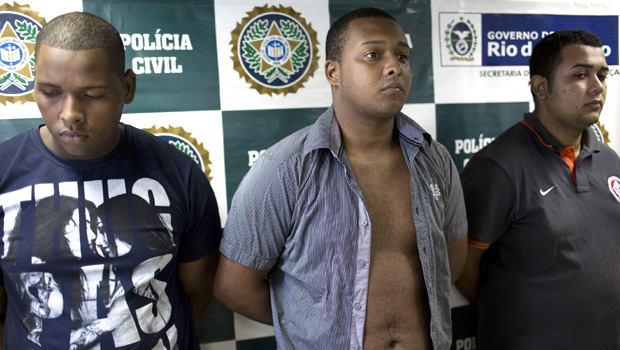 RIO DE JANEIRO A Rio de Janeiro court convicted three men Thursday in the gang rape of an American woman aboard a public transit van that shocked Brazil and made headlines around the world.

Judge Guilherme Schilling delivered the verdict Wednesday, sentencing 20-year-old Jonathan Froudakis de Souza and 21-year-old Walace Aparecido de Souza Silva each to 49 years and three months in prison on rape, robbery and extortion charges. Carlos Armando Costa dos Santos, whose age was not given, was sentenced to 21 years and seven months in prison, while a minor detained in connection with the rape has yet to be tried.

A court statement on the decision said the attacks on the woman "in many instances were laced with sadism and complete disdain for the victim."

The assault began after midnight on March 30 when the victim and her French boyfriend caught a public van in Rio's showcase Copacabana beach neighborhood en route to the popular nightlife district of Lapa. Brazilian news reports have said the couple was in the country to study Portuguese.

Van operators robbed the passengers and forced all but the couple to get off. While they restrained the Frenchman and beat him with a tire iron, they repeatedly raped the woman as they van traveled van back and forth between Rio and a nearby suburb.

The attackers also went on a shopping spree with the couple's credit cards, forcing the woman to return to the apartment where she was staying to fetch another card, the police officer overseeing the investigation has said.

The ordeal went on for around six hours before the pair was dumped in a "favela" slum in the poor Rio suburb of Sao Goncalo.

News of the case sparked widespread outrage, particularly after it emerged that the gang was suspected in previous attacks on Brazilian women that were largely uninvestigated.

The case led to a ban on public transit vans from Rio's upscale South Zone. The vans, seen as a faster alternative to the buses used as Rio's primary form of public transport, still operate in impoverished suburbs ringing the city of 6 million.