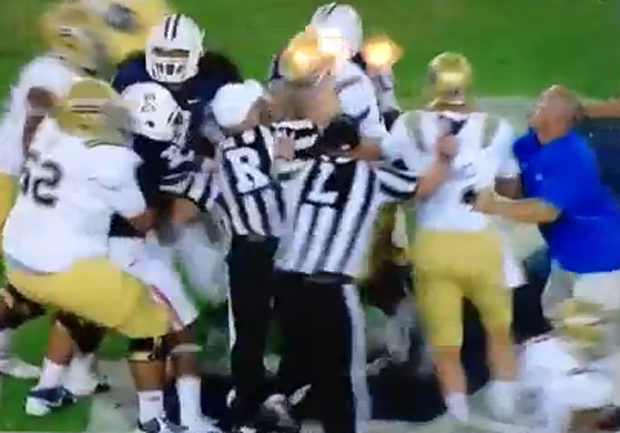 Said teammate Paul Vassallo: "We all felt like we were out on the playground again, just little kids."

"Playground" is one way to put it.

As the clock ticked down to end the first half, a guy dressed as a referee ran out onto the field. Like a toddler with a sugar high, he peeled off his clothes down to his underwear and raced down the field - before a security guard leveled him.

And then the playground got chaotic. A wild brawl erupted about 60 yards across the field after the streaker had been tackled. Players were shoved, punches were thrown and two players got ejected.

It probably had less to do with the half-naked "official" than it did with the fact that UCLA was losing by 35 points.

"That was just a result of tempers flaring on both sides; it's not something we represent as a program at all, something we can't let happen," UCLA receiver Ricky Marvray said "They were just the better team tonight and they showed it."

The Wildcats were playing their first game since Mike Stoops got the ax 10 days ago. Interim coach Tim Kish had one message for his team: have fun.

Judging from the playground atmosphere and the disrobing "referee," fun was had by everyone. Except UCLA.