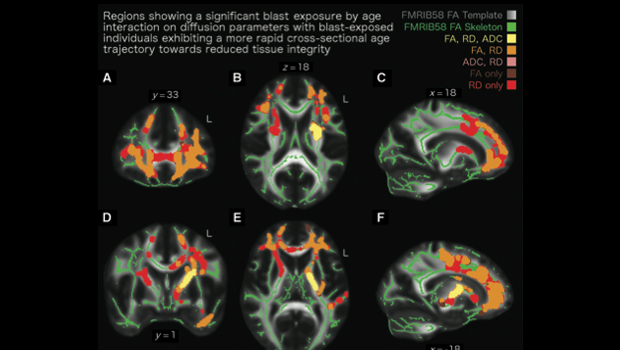 U.S. veterans who were nearby to bomb blasts in Iraq and Afghanistan appear to experience faster brain aging, according to a new study.

The study, which is the first to examine the longer-term brain health of veterans exposed to bomb blasts, was published this week in Brain: A Journal of Neurology.

"These are exposures to blasts, not necessarily blasts that lead to concussion, that feeling of fuzziness or getting knocked out," said Dr. Regina McGlinchey, a study leader at the VA Boston and director of the Translational Research Center for TBI [Traumatic Brain Injuries] and Stress Disorders, or TRACTS. "These are events where the veterans themselves thought they were just fine."

Veterans who were exposed to bomb blasts, even up to a football field away, showed aging in brain images designed to detect the "leakiness" and fraying of the white matter in the brain, a part of the central nervous system that one researcher compared to an "old telephone wire system." The results showed the same damage that happens in the normal aging process, only at a much faster rate.

"These wires get bent and stretched and they start to have little breaks in them, then water starts to leak out," said Meghan Robinson, a research fellow at VA Boston Healthcare. "Water is what we can measure in an MRI."

The consequences of this potentially premature brain aging could be increased rehabilitation time and earlier need for health care for aging issues like dementia.

Recent studies at Johns Hopkins and other institutions have also pointed to the idea that the blasts cause a kind of "shell shock" with a unique pattern of injuries and trauma.

There are approximately 2.8 million U.S. veterans of Iraq and Afghanistan. About 166,049 veterans have screened positive for mild traumatic brain injury (TBI) between 2007 and 2014, according to the U.S. Department of Veterans Affairs. This line of research could impact treatment for these veterans and potentially veterans from other conflicts, as well.

Iraq and Afghanistan veterans have survived more blasts than troops in the past because of modern armor and more advanced medical care. The military assesses troops soon after they have been exposed to blasts, but desn't usually track the long-term brain effects, if no concussion was reported.

For this study, conducted at the VA Boston, 249 subjects were asked detailed questions about their combat history and screened for a variety of mental and physical health issues as part of a broader program. 195 had been exposed to bomb blasts within 100 feet and 56 had not. Each subject had a specially-designed brain image done, a "resting state" fMRI, that showed how the parts of the brain communicated when not involved in any particular task. The researchers collected results into three different groups: troops with no blast exposure, those exposed to 1-5 blasts, and those exposed to more than 5 blasts.

"We did see people who were exposed to a higher number of blasts progressing faster toward worsened white matter health," said Benjamin Trotter, a bio-medical engineer with VA Boston and lead author of the study.

Many veterans with combat experience have multiple health challenges, which can make it more difficult to pinpoint the causes of specific issues. And in this case, it could exacerbate the affect of premature aging.

"We need to understand how to best treat someone who doesn't just have one issue, but has many kinds of things that need to be considered when you're trying to take care of them," said Robinson.

This study is the latest from the TRACTS program, which was begun in 2009 and funded by VA Rehabilitation Research and Development. It examines traumatic brain injury and post-traumatic stress in veterans. This portion of the program, examining blast exposure as a separate issue, is still at an early stage. The veterans surveyed were only an average of 33 years old.

"Now our big job is to follow these people over time and see where this leads us," Robinson said, to determine "whether what looks like accelerated aging is actually happening to individual people."