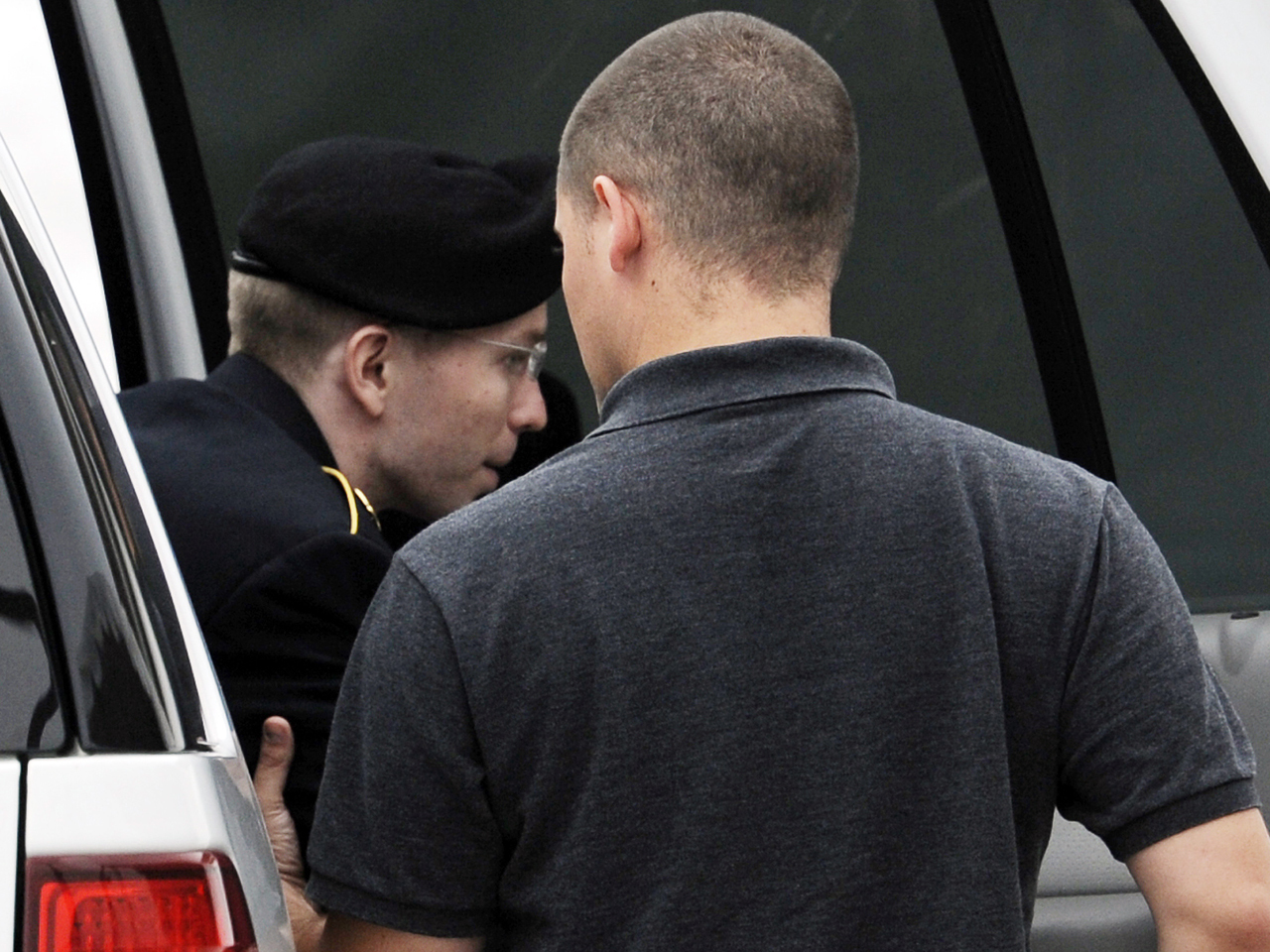 FORT MEADE, Md. U.S. Army Pfc. Bradley Manning betrayed his country's trust and spilled government secrets to make a name for himself, and he knew the material would be seen by al Qaeda, including its former leader Osama bin Laden, prosecutors said Thursday in closing arguments.

Maj. Ashden Fein said the former intelligence analyst in Iraq was not the troubled and naive soldier defense attorneys have made him out to be. Fein displayed a smiling photo of Manning from 2010 — when he was giving sensitive material to WikiLeaks — and said "this is a gleeful, grinning Pfc. Manning" who sent battlefield reports to WikiLeaks, accompanied by the message: "Have a good day."

Manning is charged with 21 offenses, but the most serious is aiding the enemy, which carries a possible sentence of up to life in prison. His defense attorneys have argued there was no evidence he knew al Qaeda specifically looked at WikiLeaks.

The 25-year-old Crescent, Okla., native has acknowledged giving the anti-secrecy website hundreds of thousands of battlefield reports, diplomatic cables and videos in late 2009 and early 2010. But he says he didn't believe the information would harm troops in Afghanistan and Iraq or threaten national security.

The material included video of a 2007 U.S. Apache helicopter attack in Baghdad that killed 11 men, including a Reuters news photographer and his driver. A military investigation concluded the troops reasonably mistook the photography equipment for weapons.

Defense attorneys will give their closing arguments later Thursday.

Fein, the military's lead prosecutor, said Manning had a dog tag with "Humanist" engraved on it, but "the only human Pfc. Manning ever cared about was himself."

"The flag meant nothing to him," Fein said.

Prosecutors have presented evidence that digital copies of some of the documents Manning leaked were found in bin Laden's compound when it was raided and the terrorist leader was killed. But prosecutors must prove Manning knew al Qaeda would see the material to get a conviction on the most serious charge.

Fein also quoted from chat logs between Manning and convicted computer hacker Adrian Lamo to try to show the soldier knew he would harm diplomats by releasing the material.

"Hilary Clinton, and several thousand diplomats around the world are going to have a heart attack," Manning wrote to Lamo in a chat cited by Fein.

Lamo turned the soldier in to authorities in May 2010.

A military judge, not a jury, is hearing the case at Manning's request. Army Col. Denise Lind will deliberate after closing arguments. It's not clear when she will rule.

The verdict and any sentence will be reviewed, and could be reduced, by the commander of the Military District of Washington, currently Maj. Gen. Jeffery S. Buchanan.

Some two dozen Manning supporters showed up hours before the court opened to protest outside the Army base, as they have often done during the trial. Inside the courtroom, about 35 spectators watched the proceedings, many of them wearing T-shirts with the word "truth" printed on them.

In a dress blue uniform, Manning sat quietly and followed along as the prosecution showed slides as part of its closing arguments, reading them off of monitor on the defense table.

Fein said Manning relied on WikiLeaks and its founder Julian Assange for guidance on what to leak within two weeks of his arrival in Iraq in November 2009.

"What is obvious is that Pfc. Manning pulled as much information as possible to please Julian Assange in order to get that information released," Fein said.

Federal authorities also are looking into whether Assange can be prosecuted. He has been holed up in the Ecuadorean Embassy in London to avoid extradition to Sweden on sex-crimes allegations.

Also Thursday, the judge refused to dismiss theft charges against Manning after the defense said prosecutors hadn't proven the allegations. The judge revised some of the theft charges to more accurately describe what was allegedly stolen, prompting the defense to ask for a mistrial. Lind refused to grant it.

Manning pleaded guilty earlier this year to reduced versions of some charges. He faces up to 20 years in prison for those offenses, but prosecutors pressed ahead with the original charges.