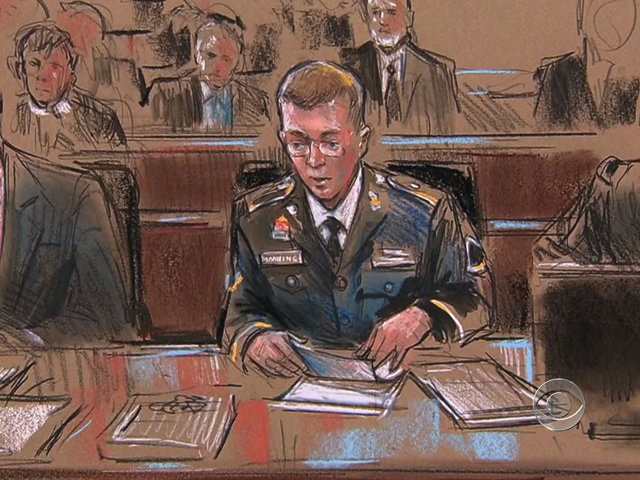 Along with the guilty pleas, Manning gave his first detailed explanation of why he did it.

Reading from a 35-page statement, the Army private said he wanted the world to know the truth about the wars in Iraq and Afghanistan.

Depressed and frustrated by the wars, he used his job as a low-ranking intelligence analyst in Baghdad to download onto a CD hundreds of thousands of classified documents -- pus a few videos, one of which depict a helicopter gunship attack that killed two journalists in Iraq, which he found "troubling" because it showed "delightful bloodlust."

Describing himself as a misfit in the military, Manning told the judge he first contacted The Washington Post but didn't think the reporter took him seriously; then called The New York Times' tip line but never heard back.

He was home on leave during a blizzard, which paralyzed Washington, and left him stranded at his aunt's house when he decided to send the material to WikiLeaks, the website which had a reputation for exposing secrets.

He included a brief note, ending with "Have a good day," and went back to Iraq with "a sense of relief" and "a clear conscience."

Despite pleading guilty to some of the charges, Manning still faces a court martial and possible life sentence for allegedly aiding the enemy.

Prosecution attorneys have said they intend to show that some of the leaked documents were found by Navy SEALs in their raid on Osama bin Laden's hideout. According to a military attorney, the prosecution does not have to prove Manning intended for the documents to end up in enemy hands -- only that he knew it might happen.

Manning testified that no one at WikiLeaks pressured him for more documents and that he knew what he did was wrong.