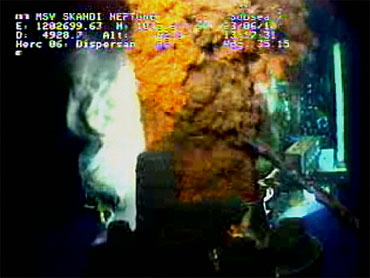 The cost of BP's response to the Gulf of Mexico oil spill has reached about $2.65 billion, the company said Monday.

BP says the figure does not include a $20 billion fund for Gulf damages it created this month.

Millions of gallons of oil have spilled since the Deepwater Horizon rig exploded 50 miles off the coast of Louisiana on April 20, killing 11 workers.

Meanwhile, BP strongly denied a report out of Russia that CEO Tony Hayward was resigning from the company.

Russia's state RIA Novosti news agency quoted Deputy Prime Minister Igor Sechin as saying that Hayward "is leaving his post." Sechin, who is set to meet with Hayward on Monday, said the BP chief would introduce his successor.

Hayward was to assure officials of BP's viability and discuss issues related to Russian joint venture TNK-BP, which accounts for about a quarter of BP's reserves and production.

It was a rocky start to the week after BP PLC stock fall 6 percent Friday in New York to a 14-year low. BP has lost more than $100 billion in market value since the disaster started.

BP shares gave up some ground in London after the Hayward report emerged from Russia. But they were still up a fraction at 306.75 pence ($4.62) . BP's U.S. shares gained about 2 percent in premarket trading.

• Calling the spill that has released millions of gallons of oil onto four Gulf States "a devastating, catastrophic event," Florida Gov. Charlie Crist said he wants an end to oil exploration off his state's coastline.

In addition to plugging the leak at the site of BP's destroyed Deepwater Horizon rig, Crist said this morning that "We need to stop offshore oil drilling in Florida.

"I would like to have a special session to ban it here in the Sunshine State," he told CBS "Early Show" anchor Harry Smith Monday. "We're so dependent on tourism for our economy, it's very important that we keep [the beaches] clean."

Crist joined other protesters in Hands Across the Sand rallies held this weekend in Florida and across the U.S. and in other countries, promoting renewable energy sources and demanding an end to offshore drilling.

• Tropical Storm Alex is gaining strength as it swirls across the Gulf of Mexico on a path toward Mexico's northeastern coast that threatens to push oil from the massive spill farther inland.

The tropical storm's center isn't expected to approach the area of the oil spill off Louisiana's coast, but Stacy Stewart, a senior hurricane specialist at the National Hurricane Center in Miami, said Monday Alex's outer wind field could push oil from the spill farther inland and hinder operations in the area.

Forecasters also said Alex could become a hurricane later in the day Monday or on Tuesday.

On Friday, BP and Witt's company were still hammering out the details of a contract. Dudley told reporters he asked Witt to go down to New Orleans with him to get some feedback on the company's response and what it could do in the future.

Witt was director of the Federal Emergency Management Agency during the Clinton administration. A Dudley-Witt duo could be harder for Gulf Coast officials to criticize. For years Witt's consulting firm has been working with governments in that region to help with disaster planning and recovery.

"When James Lee Witt does something, people listen and respect it," said Bev Ciglar, a public policy professor at Penn State University. "I'm very, very surprised that he has not been more involved."