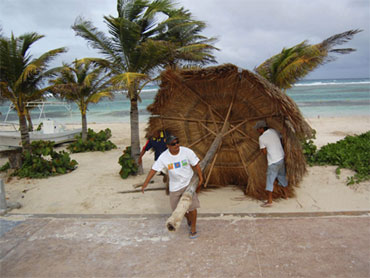 Hurricane watches are in effect for a stretch of Gulf coast in southern Texas and northern Mexico.

Tropical Storm Alex appears on track to become a Category 3 hurricane before it makes landfall later this week.

The storm's center isn't expected to approach the area of the oil spill off Louisiana's coast. But the outer wind field could push oil from the spill farther inland and hinder operations in the area.

Tropical storm-force winds extend up to 70 miles from Alex's center.

Heavy rains in the southern Gulf coast state of Tabasco have forced the evacuation of about 300 families near a river.

Alex was swirling through the Gulf of Mexico with winds of 60 mph (95 kph) on a path that would take it very near the Mexico-U.S. border sometime Thursday, said the National Hurricane Center in Miami, Florida.

The storm is expected to become a hurricane Tuesday, and could build winds as high as 120 mph by Wednesday.

The hurricane watches extended about 225 miles south of the U.S. border over an area of sparsely populated Mexican coast, and about 100 miles north along the Texas coast from the Rio Grande to just south of Baffin Bay.

Mexico's northern Gulf coast braced for heavy rains, and forecasters said precipitation from Alex will keep falling on southern Mexico and Guatemala until Tuesday, raising the possibility of life-threatening floods and mudslides.

"It is a fact we are going to get very heavy rains," said Gov. Fidel Herrera of the Gulf coast state of Veracruz.

On Sunday, heavy rains prompted a landslide in northwestern Guatemala that dislodged a large rock outcropping, killing two men who had taken shelter from the storm underneath, according to the national disaster-response agency.

In El Salvador, Civil Protection chief Jorge Melendez said two people were swept away by rivers that jumped their banks. About 500 people were evacuated from their homes.

There were no immediate reports of damage to Mexico's resort-studded Caribbean coast.

When Alex became the first named storm of the Atlantic hurricane season, officials immediately worried what effect it could have on efforts to contain the millions of gallons of crude spewing into the northeastern part of the Gulf.

A cap has been placed over the blown-out undersea well, directing some of the oil to a surface ship where it is being collected or burned. Other ships are drilling two relief wells, projected to be done by August, which are considered the best hope to stop the leak.

Alex was centered about 85 miles northwest of Campeche, Mexico, and 535 miles southeast of Brownsville, Texas, on Monday. Its rains could reach Veracruz and the border state of Tamaulipas late Tuesday or Wednesday, the Hurricane Center said.