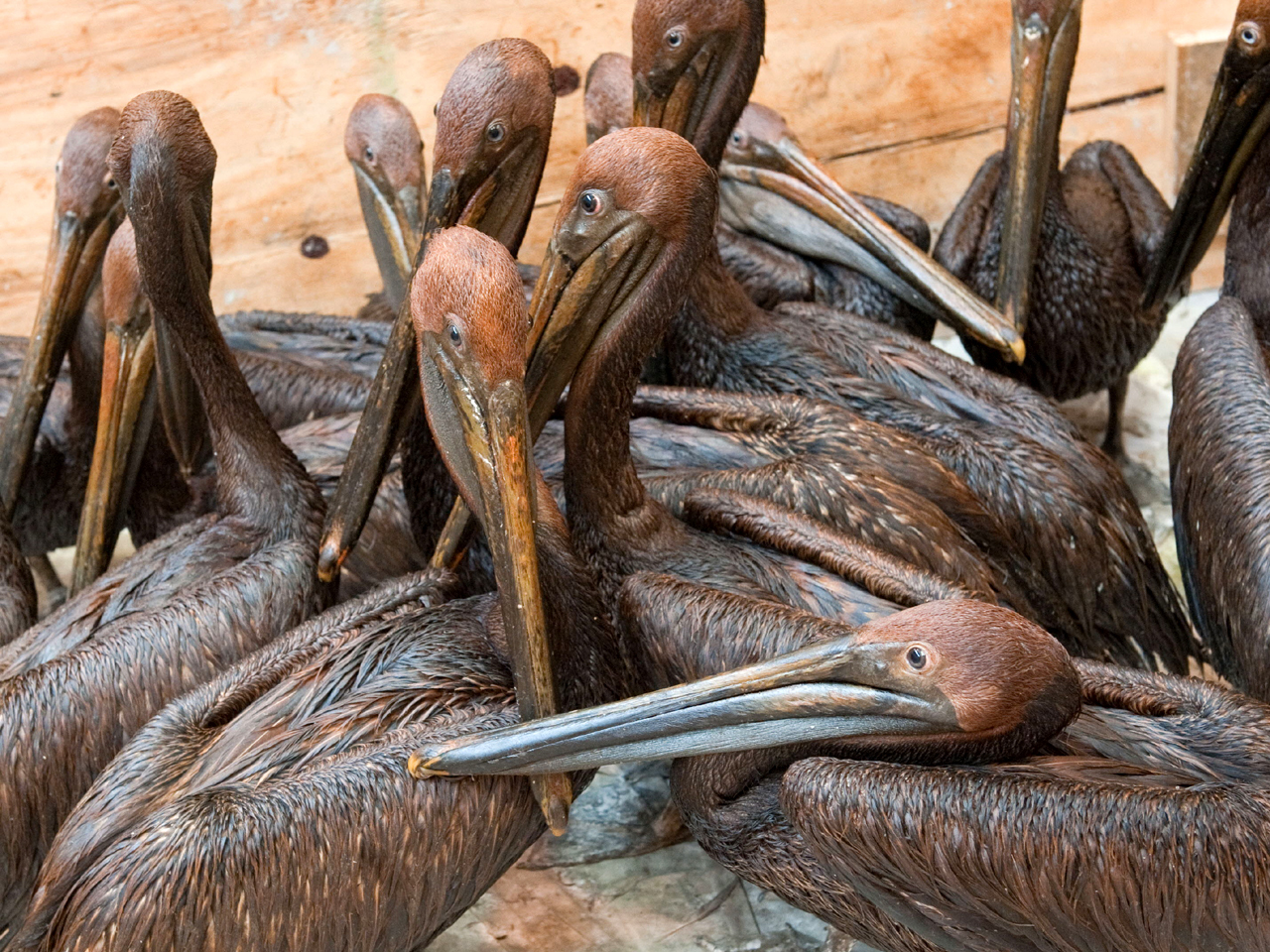 NEW ORLEANS Two men who worked for BP during the 2010 Gulf oil spill disaster have been charged with manslaughter and a third with lying to federal investigators, according to indictments made public Thursday, hours after BP announced it was paying $4.5 billion in a settlement with the U.S. government over the disaster.

A federal indictment unsealed in New Orleans claims BP well site leaders Robert Kaluza and Donald Vidrine acted negligently in their supervision of key safety tests performed on the Deepwater Horizon drilling rig before the explosion killed 11 workers in April 2010. The indictment says Kaluza and Vidrine failed to phone engineers onshore to alert them of problems in the drilling operation.

Another indictment charges David Rainey, who was BP's vice president of exploration for the Gulf of Mexico, on charges of obstruction of Congress and false statements. The indictment claims the former executive lied to federal investigators when they asked him how he calculated a flow rate estimate for BP's blown-out well in the days after the April 2010 disaster.

Rainey's lawyer said his client did "absolutely nothing wrong." And attorneys for the two rig workers accused the Justice Department of making scapegoats out of them.

"Bob was not an executive or high-level BP official. He was a dedicated rig worker who mourns his fallen co-workers every day," Kaluza attorneys Shaun Clarke and David Gerger said in a statement. "No one should take any satisfaction in this indictment of an innocent man. This is not justice."

Before Thursday, the only person charged in the disaster was a former BP engineer who was arrested in April on obstruction of justice charges. He was accused of deleting text messages about the company's response to the spill.

"Today's resolution does not - does not - mark the end of our efforts," Attorney General Eric Holder told reporters at an afternoon news conference. "In fact, our criminal investigation remains ongoing, and we'll continue to follow all credible leads and pursue any charges that are warranted."

Earlier in the day, BP PLC said it would plead guilty to criminal charges related to the 11 workers' deaths and lying to Congress.

The day of reckoning comes more than two years after the nation's worst offshore oil spill. The figure includes nearly $1.3 billion in criminal fines -- the biggest criminal penalty in U.S. history -- along with payments to certain government entities.

The settlement appears to be well within BP's means, considering the oil giant made a record $25.8 billion in profits last year. And it will be given five years to pay. But the company still faces huge additional claims.

CBS News senior legal analyst Andrew Cohen reports any deal still has to be approved by a federal judge but the Justice Department will make the case that the amount of the settlement is a record and is needed now to offset the cost of the cleanup and other damages.

Al Sunseri, owner of P&J Oyster Company in New Orleans' French Quarter, told CBS Radio News he was pleased about the settlement even though his oyster business is still not the same more than two years later.

"I'm glad to hear that BP is stepping up to the plate and admitting their wrongdoing and will work with the federal government in paying the fines that are necessary," Sunseri said.

London-based BP said in a statement that the settlement would not cover any civil penalties the U.S. government might seek under the Clean Water Act and other laws. Nor does it cover billions of dollars in claims brought by states, businesses and individuals, including fishermen, restaurants and property owners.

A federal judge in New Orleans is weighing a separate, proposed $7.8 billion settlement between BP and more than 100,000 businesses and individuals who say they were harmed by the spill.

BP will plead guilty to 11 felony counts of misconduct or neglect of a ship's officers, one felony count of obstruction of Congress and one misdemeanor count each under the Migratory Bird Treaty Act and the Clean Water Act. The workers' deaths were prosecuted under a provision of the Seaman's Manslaughter Act. The obstruction charge is for lying to Congress about how much oil was spilling.

The penalty will be paid over five years. BP made a profit of $5.5 billion in the most recent quarter. The largest previous corporate criminal penalty assessed by the U.S. Justice Department was a $1.2 billion fine imposed on drug maker Pfizer in 2009.

Greenpeace blasted the settlement as a slap on the wrist.

"This fine amounts to a rounding error for a corporation the size of BP," the environmental group said.

Nick McGregor, an oil analyst at Redmayne-Bentley Stockbrokers, said the settlement would be seen as "an expensive positive."

"This scale of bill is unpleasant," he said. "But "the worst-case scenario for BP would be an Exxon Valdez-style decade of litigation. I think that is the outcome they are trying to avoid."

The Deepwater Horizon rig, 50 miles off the Louisiana coast, sank after an April 20, 2010, explosion that was later blamed by investigators on time-saving, cost-cutting decisions by BP and its drilling partners in cementing the well shaft.

One of the survivors from the blast, Mike Williams, described to "CBS Evening News" anchor Scott Pelley in a "60 Minutes" interview his escape from the rig, with the sea 10 stories below. "I remember closing my eyes and," he said, "and saying a prayer and asking God to tell my wife and little girl that 'daddy did everything he could. And if I survive this it's for a reason.' I made those three steps, and I pushed off the end of the rig. And I fell for what seemed like forever. A lot of things go through your mind."

The well on the sea floor spewed an estimated 172 million gallons of crude in the Gulf, fouling marshes and beaches, killing wildlife and shutting vast areas to commercial fishing.

After several failed attempts that introduced the American public to such industry terms as "top kill" and "junk shot," BP finally capped the well on July 15, 2010, halting the flow of oil after more than 85 days and putting an end to one of the most closely watched spectacles on TV and the Internet: the live spill-camera image of the gushing crude.

Nelda Winslette's grandson Adam Weise of Yorktown, Texas, was killed in the blast. She said somebody needs to be held accountable.

"It just bothers me so bad when I see the commercials on TV and they brag about how the Gulf is back, but they never say anything about the 11 lives that were lost. They want us to forget about it, but they don't know what they've done to the families that lost someone," she said.

Sherri Revette, who lost her husband of 26 years, Dewey Revette, 48, of State Line, Miss., said the indictments against the employees brought mixed emotions.

"I'm saddened, but I'm also happy at the same time that they will be prosecuted. I feel for them, of course. You never know what impact your actions will have on others," she said. She added: "If they had made a phone call, who knows what the outcome would have been?"

The spill exposed lax government oversight and led to a temporary ban on deep-water drilling while officials and the oil industry studied the risks, worked to make it safer and developed better disaster plans. BP's environmentally friendly image was tarnished, and CEO Tony Hayward stepped down after the company's repeated gaffes, including his statement at the height of the crisis: "I'd like my life back."

The cost of BP's spill far surpassed that of the Exxon Valdez disaster in 1989. Exxon ultimately settled with the U.S. government for $1 billion, which would be about $1.8 billion today.

The government and plaintiffs' attorneys also sued Transocean Ltd., the rig's owner, and cement contractor Halliburton, but a string of pretrial rulings by a federal judge undermined BP's legal strategy of pinning blame on them.

U.S. District Carl Barbier in New Orleans will have the final say over the settlement. He is also the judge deciding whether to give final approval to the $7.8 billion deal involving shrimpers, commercial fishermen, charter captains, property owners, environmental groups, restaurants, hotels and others who claimed they suffered financial losses.

Relatives of workers killed in the blast have also sued. And there are still other claims against BP from financial institutions, casinos and racetracks, insurance companies and local governments.