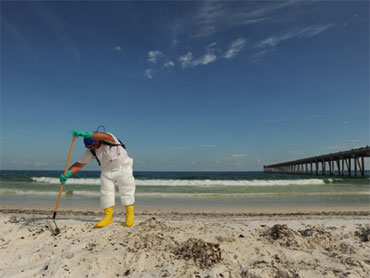 Tests show BP is on target for mid-August completion of a relief well in the Gulf of Mexico, the best hope of stopping the oil that's been gushing since April, the company said Friday.

The crew drilling the first of two wells ran a procedure this week to confirm it is on the correct path, spokesman Bill Salvin said.

"The layman's translation is, 'We are where we thought we were,"' he said.

Several such tests are needed to determine the relief well's location relative to the well that blew out April 20 when the offshore drilling rig Deepwater Horizon exploded. Once the new well intersects the blown-out one, BP plans to pump heavy drilling mud in to stop the oil flow and plug it with cement.

Salvin said the relief well should be done by mid-August, but that didn't seem to help the company's stock price, which plunged following the company's announcement that the price tag for the response has risen to $2.35 billion.

BP shares fell nearly 4 percent in New York Friday. If the decline holds, BP will have lost more than $100 billion in market value since a rig it operated exploded in the Gulf of Mexico.

In Florida, officials on Thursday closed a quarter-mile stretch of Pensacola Beach not far from the Alabama line when thick pools of oil washed up, the first time a beach in the state has been shut because of the spill. A large patch of oil oozed into Mississippi Sound, the fertile waters between the barrier islands and mainland of a state that has mostly been spared.

The news came as a cap collecting oil from the well was back in place after a deep-sea robot bumped it and engineers concerned about escaping gas removed it for about 10 hours Wednesday.

Even before that latest setback, the government's worst-case estimates suggested the cap and other equipment were capturing less than half of the oil leaking from the seafloor. And in recent days, the "spillcam" video continued to show gas and oil billowing from the well.

BP's pronouncements that it would soon be able to collect more spewing oil have "absolutely no credibility," Jefferson Parish Councilman John Young said. The latest problem shows "they really are not up to the task and we have more bad news than we have good news."

BP officials said they sympathized and planned to do more.

"For BP, our intent is to restore the Gulf the way it was before it happened," BP PLC managing director Bob Dudley, who has taken over the company's spill operations, said in Washington.

Coast Guard Adm. Thad Allen said Vice President Joe Biden will head to the Gulf on Tuesday to visit a command center in New Orleans and the Florida Panhandle, where a section of a popular beach was closed because large pools of oil washed up.

Meanwhile, officials kept a wary eye on an area of low-pressure in the Caribbean that threatened to turn into the first tropical depression of the Atlantic season.

BP would need about five days to move all of its equipment out of harm's way if a storm threatens, Salvin said. So far, the company hasn't started that process.

Lt. Cmdr. Dave Roberts, a Navy hurricane specialist at the National Hurricane Center, said an Air Force reconnaissance plane was on its way to investigate the system Friday and would likely know later in the day whether it will develop further.

The equipment to be secured would include ships working to process oil being sucked to the surface from a containment device and the rigs drilling the two relief wells.

The first well, started May 2, reached a depth of 16,275 feet on Wednesday before workers paused for the first test known as a ranging run. Although the first relief well is only 200 feet laterally from the original well, the crew still has to drill around 3,000 feet deeper before it can intercept the original well, according to Salvin.

"We have to hit a target essentially nine inches in diameter," he said.

Worst-case government estimates say about 2.5 million gallons are leaking from the well, though no one really knows for sure.

At nearly every important juncture since the Deepwater Horizon rig exploded April 20, killing 11 workers, the government's and BP's estimates on the size of the spill, its effect on wildlife and the time frame for containing it have spectacularly missed the mark.

On June 8, BP chief operating office Doug Suttles said the spill should be reduced to a "relative trickle" in less than a week. BP later said it would take more time for the spill to reach a trickle.

August seems a long way off to many dealing with the fallout that includes oil washing up on beaches and creeping into delicate wetlands.

Along Pensacola Beach in Florida, part of which was closed Thursday, lifeguard Collin Cobia wore a red handkerchief over his nose and mouth to block the oil smell. "It's enough to knock you down," he said.

Others weren't happy about the situation but declined to second-guess the BP engineers.

"I have no clue at all about the correct way to stop it," said Rocky Ditcharo, a seafood dock owner in Louisiana's Plaquemines Parish. "'Powerless' - that's a good word for it."