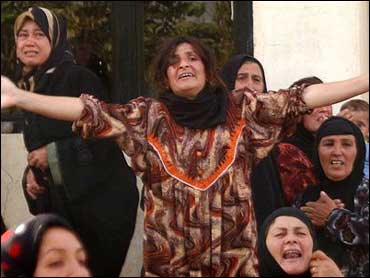 Kamal Hamdoun, one of the 12 remaining Sunnis appointed to the commission last month, said the Sunnis would continue their boycott pending an international investigation into the assassinations of two colleagues Tuesday and until other demands are met.

Even if the Shiite and Kurdish committee members decided to try and meet the August deadline without Sunni participation, questions would be raised over the legitimacy of a charter and whether it would win Sunni approval in an October referendum.

Elsewhere, two suicide car bombings and a string of other attacks in and around Baghdad Thursday left 15 people dead, police and army officials said.

A suicide car bomber rammed into an Iraqi army checkpoint, killing six soldiers in Mahmoudiyah, about 20 miles south of the capital. Thirteen others were injured, army Lt. Odai al-Zeiadi said.

A second Iraqi army checkpoint in the southern Baghdad suburb of Bueitha was also hit by a suicide car bomber, killing one soldier, al-Zeiadi said. Six other soldiers were injured, he said.