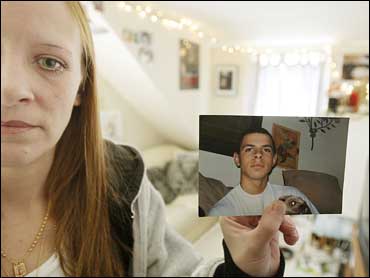 Like most boys, 13-year-old Mykel Mendes looked up to his big brother, Jordan. The two rode bikes together, did yard work together and hung out together. But when it came to the family business - a major drug ring - Mykel did not want to share, police say.

Mykel is now accused of masterminding the slaying of his 16-year-old half-brother so he could take over the drug operation - one police say they inherited from their father, who is in prison for running one of the biggest cocaine rings on Cape Cod in Massachusetts.

Jordan was found shot, stabbed 27 times and dumped into a pit, where his body was torched. Another 13-year-old friend and a 20-year-old cousin also are charged with murder.

The killing has shaken the normal quiet of winter on Cape Cod, the summer tourist destination known for its beautiful beaches, salt water taffy and famous residents. Jordan Mendes lived just a few miles from the compound of the Kennedy political dynasty in Hyannis Port.

"It's very disturbing," said Debra Dagwan, a Hyannis resident and member of the local school board. "It indicates what drugs can do to people, whether they are involved with drugs or selling them. It's a dangerous life, no matter how you look at it."

Mykel's lawyer, John Cunha, dismissed claims by authorities that Mykel planned his brother's death to take over his drug business.

The boys' father, Manuel Mendes, 33, ran a drug ring that brought large quantities of cocaine to the Cape from New York and Boston. Jordan was 8 and Mykel just 5 when he was arrested and sent to prison to serve eight to 10 years. Two years later, in 2002, authorities caught him running the drug business from behind bars. That time, he was sentenced to 35 years on federal drug trafficking charges.

Mykel, according to authorities, was jealous of the money Jordan was making and wanted to take over.

(AP/Barnstable Police Department)
Over two days in December, police say Mykel, his 20-year-old cousin, Robert Vacher (left), and 13-year-old Kevin Ribeiro stole $10,000 in cash from Jordan, killed him, poured gasoline on his body and set him on fire.

The three walked into a car dealership, pulled the $10,000 out of their pockets and bought a used silver BMW, O'Keefe said.

Lawyers for all three youths deny they took part in the slaying.

"To actually kill somebody to obtain money to buy a used car, which they have no license for and won't be able to get a license for almost four years - that's not the way 13-year-olds think," said William Gens, Ribeiro's lawyer.

Mykel, who has a different mother, did not grow up in the same house as Jordan. But after Mykel moved to the Cape with his mother, the boys became inseparable, according to family members and friends.

"Jordan was very close to Mykel. He took care of him, looked out for him. He loved him," said Jordan's mother, Paula Carberry.

After his father was sent to prison, Jordan - named after basketball star Michael Jordan - became "the little man in the house," Carberry said.

"He was hurt," she said. "I think he would get angry because there wasn't anything he could do."

Carberry denies Jordan was involved in drugs and says he had recently begun to turn his life around after some minor scrapes with the law, including arrests for marijuana possession and trespassing. His mother said his grades in school had recently improved and he had talked with an ex-girlfriend about moving to Florida after finishing high school to open a clothing store.

(WBZ)
When Jordan did not come home from school Dec. 15, Carberry and other family members went out to look for him. The next day, they found his body - still burning - in a pit in woods less than a mile from Carberry's home.

Ribeiro's chilling account of the slaying is outlined in a one-page police report.

As Jordan walked down the basement stairs of Mykel's house, Vacher shot him, then stabbed him repeatedly in the neck, Ribeiro told police.

Ribeiro said he and Vacher then rolled Mendes' body in a rug and took it to the pit. The next day, he said, they brought a container of gasoline and set Mendes' body on fire, according to the police report.

The two boys are now in the custody of the state Department of Youth Services. Because of their age, they cannot be tried as adults for murder. If convicted, the teens would remain in state custody until they reach 18. Vacher was being held without bail on charges of robbery and first-degree murder.

Carberry said she always thought Mykel was jealous of Jordan, but cannot understand how he could do what he is accused of doing.

"What ever happened to my brother's keeper?" she said.

"You were supposed to be my brother's keeper, and he was yours."